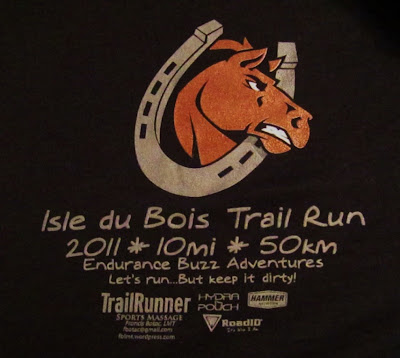 It's another 50K in the books for the Zombie/Hoover team. We made the trip to Denton, TX, stayed in an awesome Holiday Inn Express, and woke early to head out to Lake Ray Roberts for this first-year event-- the Isledu Bois 50K. Our friend David Hanenburg of Endurance Buzz cut his race-directing teeth on this 50K, and did an A+ job. 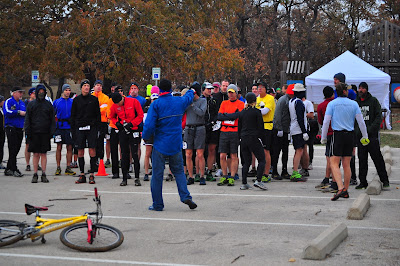 The weather forecast said 30°, partly cloudy skies, and light winds. It WAS 30°, there was a dense cloud cover and 20-30 MPH winds as we shivered together before the race start. 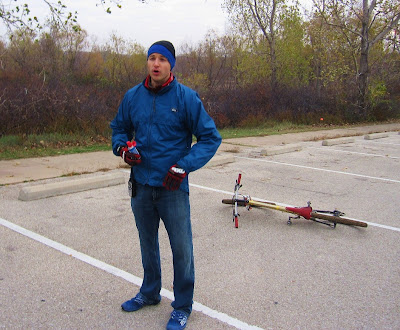 David goes over some course directions just before the race. It was 10 mile loops that traversed several connecting mountain bike trailz. Our 2nd and 3rd loops were a bit different (longer) than the first, to make the distance a full 31 miles. It sounded a little complicated, but it never was. Every turn was well marked and while at times, I wondered where I was on the course, I never felt lost. 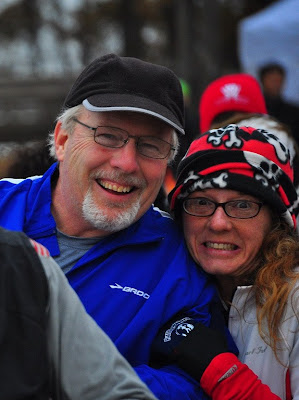 Bundled up seconds before the start, we both peeled clothes throughout the day. 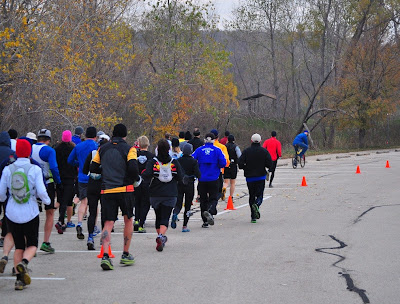 David uttered the word "go", and pedaled out to make sure we made a critical turn off a paved trail onto the first of many miles of single track. 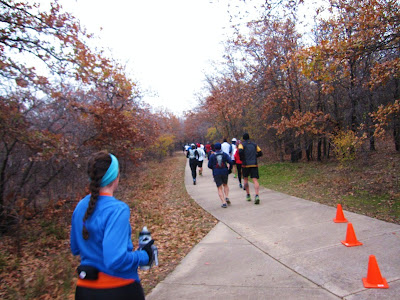 The first mile was on an 8' wide concrete sidewalk, which allowed the runners to get spread out a little. There were ~65 50Kers, and over 100 10-milers who started a half hour later. 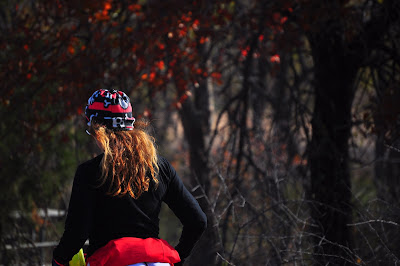 Kathy and I ran together for maybe 100 yards. I was experiencing that not-yet-really-into-it feeling--the one that takes about 3 miles to shake, and this was the last I saw of her, save a couple of glimpses where the winding twisty trailz doubled back on themselves. 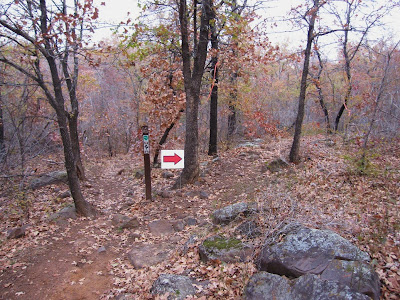 By the time I reached the single track, I was the caboose. Nothing new here. I ran relaxed and enjoyed the trip. 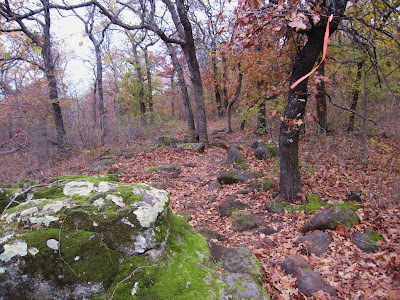 There were a few rocky sections, but they never were long. I was cautious through the rocky areas since I had strained my right ankle the day before. 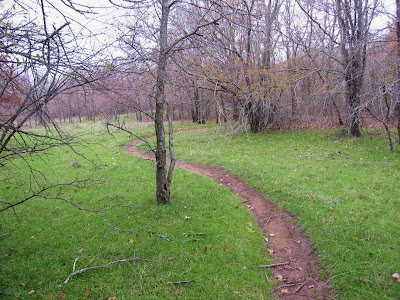 Most of the trailz were nice narrow soft dirt tracks.... 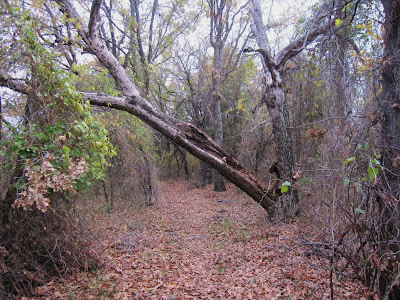 ....or leaf covered. I popped my gimpy ankle in a leaf covered area like this around mile 3. After saying a few rated pg-13 words, I walked a bit and eventually felt like running. 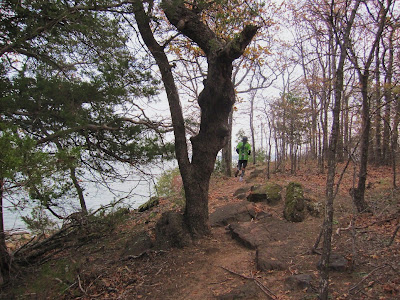 There were two different sections that ran along the shores of the lake. This is at mile 4, and this dude ahead from the 10 mile race blew by me like I was standing still. 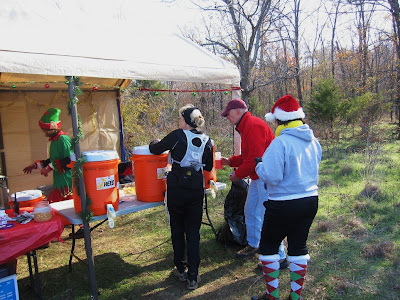 The one manned aid station on the course (other than the start/finish) was manned by elves from the North Pole. 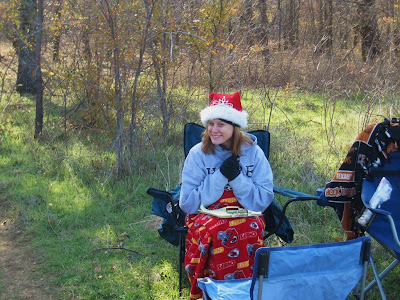 It had warmed into the low 40s by this time--perfect for runners, but a bit chilly for aid station volunteers, even elves. 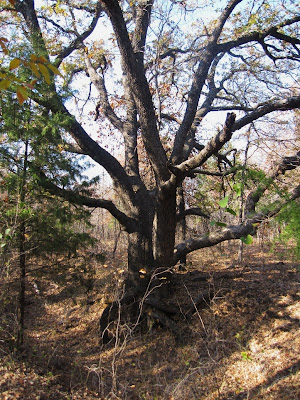 The next five miles had multiple switchbacks, and I was clueless to which way was north/south, and where the finish line was. But again, every turn was so well marked that I never was worried. I liked this tree. Four or five steps after taking this picture, I rolled my ankle very badly. I was around a mile +/- from the finish where I had my neoprene ankle brace in my car. I should have started the race with it on. 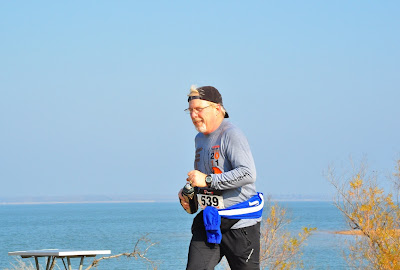 Brian was parked in a comfy chair taking pictures of all the runners as they came through. I have snagged a few of them for this blog post. His are the ones with colors that pop, thanks to a big-dog camera, and obviously the ones where I am pictured.

I ditched my jacket, peeled off my Pumpkin Holler shirt and the Icebreaker tee, and put the PH 100 shirt back on--didn't want to mess with re-pinning my number. I also changed out of the tights into my shorts, and put my braces on both ankles. I was good to go, but burned a good 20 minutes changing and visiting the porta-potty. But I was not in racing mode. 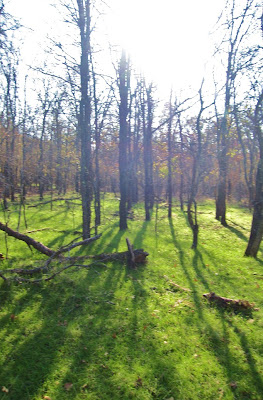 This loop went a different way bypassing much of the mile long sidewalk we had on the first loop. This extra dirt trail seemed like a LOT more mileage, but I may have been letting fatigue influence my distance perception. 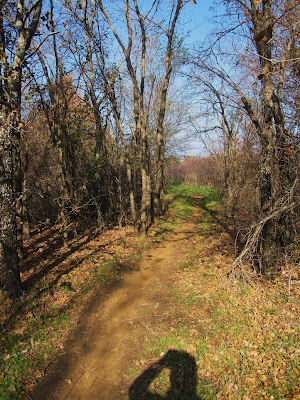 I paused briefly several times for pictures. No shortage of scenic trailz here--and of course my shot-into-the-sun pic. 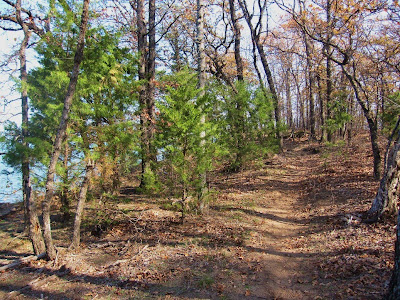 This stretch of trail reminded my a lot of Lake McMurtry--in fact, most of this course was like McMurtry.... 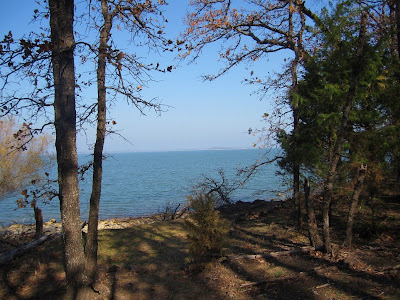 ....but this was a much bigger lake. Through here, the north breeze lapped waves along the rocky shores. Pleasing to the eyes and ears. 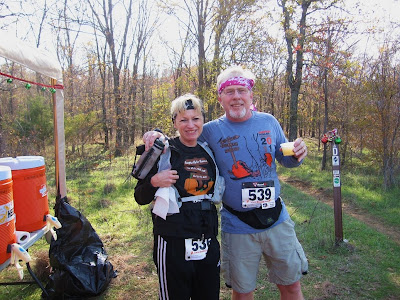 Second time through the Fire Road aid stop, I caught up with Deborah. Deb ran Pumpkin Holler, and had to show off her shirt. I was surprised I actually had caught someone, but she told me she had started early and was just taking it easy.

From here, I tried to pick it up a little. My ankle was behaving, and I kept my average pace around 15 minutes per mile. I blew through the start/finish as quickly as possible. I ran my 1st loop in 2:30, and my second in 2:52 (that included my clothes change and bathroom break. I had 2:48 to finish, and I had to make the Fire Road aid station by 3:00 or I would be pulled. So, I pushed the pace as much as I could. Again--not racing, but less loafing and less pictures. Coming into Fire road for the 3rd time, I was 6 minutes over the time limit. 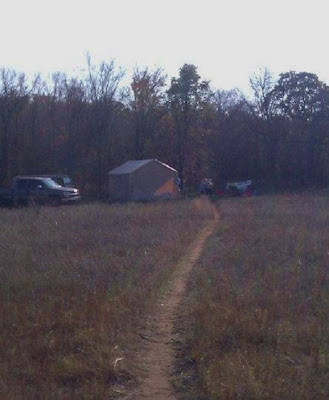 They were on the phone talking about whether or not to pull me. I was asked how I felt, and truly, I felt great. They checked my name and number, and gave the the green light to go. From here, it looked like I'd come in maybe 15-20 minutes over the 8:30 time limit. I pushed (read that, shuffled slightly faster) and I began to see runners ahead. About a mile from the end, I caught one, and passed. A couple of girls were in sight, but when I thought I was close, I was seeing them where I was a couple of switchbacks behind. When I hit the 1/4 mile of sidewalk near the end, I let it all out and ran at 99% effort. There was a bit of cheering at the end, and Kathy took a few pictures of me chugging along. (If I get a look at these pix and if they are either flattering, or editable, I'll post one. I finished in 8:34, and I'm ok with that. If I leave my camera, I finish at least 20 minutes earlier. If I started with my ankle brace, I finish another 20 minutes earlier. My friend Julie Dolph said that her Garmin read 33 miles, and I bet that's right. My Garmin got bumped off on one of my falls, and later ran out of juice, so I don't have an accurate measure.

Speaking of Julie, she also fell three times, and then on her 4th fall at mile 29, she busted her bottom lip on a rock and crossed the finish line looking like a zombie after a feeding frenzy. Check out her blog for a couple of nice grizzly pictures. She is a honey badger of a trail runner.

Kathy finished in 8:05, and said she had a so-so run. But we both liked the course and again, David did a great job. The race shirt is a real keeper. It's an organic cotton/bamboo blend, and is so comfy. The horse and horseshoe art in the top pic is the front of the shirt. Look for David's race report on Endurance Buzz.