Each year on or around my birthday I do a Birthday Challenge. It involves doing some sort of something a number of times corresponding to my age. It frequently involves running--I'm so one-dimensional. For my 50th birthday, I ran 50 miles with my friend K2, who's birthday is also in July and we are the same age (well--he's actually 17 days older.) We've done hill climbs, which ended falling way short of our goal. I biked my age once, which was not really a big deal. In 2011, for my 52nd birthday, we did 52 bridge crossings on the Arkansas River RR Pedestrian Bridge. Our mileage total, since the bridge is a 1/4-mile one way, gave us a perfect half marathon and it was 103 degrees when we started. It was a battle, but running on the shaded bridge is actually not that bad when a good breeze blows along the river.
It's hard to come up with something different every year, so it was no surprise that this year would be another running event. This year I decided to go back to the RR Pedestrian Bridge but instead of doing 58 crossings, I’d do 58 out and backs. That would add up to around 29 miles, and that’s just what I needed in my training schedule.

I sent out a Facebook invite to 200 of my running friends, and the interest was high. 35 people confirmed they were coming, and there were about that many “maybes.”

This event was also significant because in the next few weeks the RR Pedestrian Bridge is being demoed and a new fancy schmancy bridge is being erected in its place. Our old bridge has decades of fond memories and it seems like once again progress is blasting away another piece of art and history. Having this running party gave a lot of people a chance to enjoy their bridge one more time.

I left in time to get there by 7:00 pm, but I didn't allow time to drag my huge-ass ice chest loaded with water, Gatorade, various beers, and ice .8 of a mile, so I rolled in about 7:10. There was already several people there--some waiting, and some had already started knocking out some repeats. I was thrilled to see so many friends showing up!!

One such friend was Chrissy Whitten. Chrissy and family recently moved to Tuttle, OK (130 miles away!) and she made it to my birthday run. Chrissy had 58 repeats dialed in, and she never misses her mark. I was honored that she came. :-)

There was no formal start or finish. Some people had already begun, and runners came off and on through the evening.

I took a short break every 5 laps to fill my water bottle, and drink a Gatorade. A couple of times I had a shot of Fireball or a beer. I was not the only one who brought a cooler so there were enough refreshments to supply a small country. Clint caught me opting to run with a Dos Equis instead of my water bottle.

My buddies BfkaM and Travis ran several miles together. I'd catch up, or they'd lap me and I'd hang with them for a bit,  eavesdropping and drafting all the while.

This sort of thing is really FUN for me, but I was surprised at how many people told me it was the best birthday party ever. I don't know about that, but running with friends IS always enjoyable.

The following picture and quote were borrowed from Laura Bower's Facebook wall. She clearly illustrates the difference in desired ways to spend a birthday. :-)

"Ideal birthday according to me: Sleep til noon. Spend all remaining hours wearing stretchy pants and stuffing my face with cake until I pass out, a contented smile on my buttercream frosting-coated lips and a defibrillator and my Last Will and Testament at the ready just in case

Ideal birthday according to TZ: Run up and down the pedestrian bridge 58 times to celebrate 58 years, thus completing the world's flattest ultramarathon as the very picture of health, vitality, and questionable life choices.

Gosh, I love being friends with psychopaths. Thanks, TZ, for letting me be part of your rampaging lunacy!" 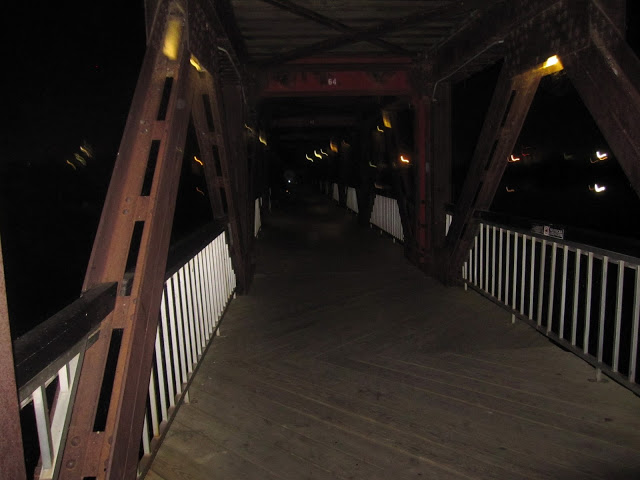 You'd expect miserably hot weather the first week of August, but we have had a change in the weather pattern and the highs have stayed in the 80s. With a steady southeast wind, it was a near perfect night for running. When the sun went down, the temperature dropped around 10 degrees, and if felt like a late September evening. 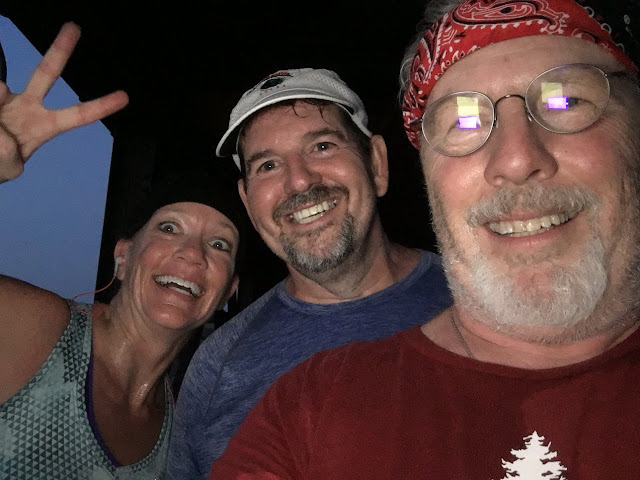 I was sitting at 21 laps here. I am assuming BfkaM and Betsy had about the same. Once night fell, little by little people called it a night. More people rolled in even after 10:00, so up until midnight, there was a continual stream of runners on the bridge.

I stayed pretty steady as the temperatures dropped, but somewhere around 11:00, the wind died down and the heat and humidity raised their ugly head. I started mixing in a 100 step walk break per lap and stayed steady on the shuffle on the rest. 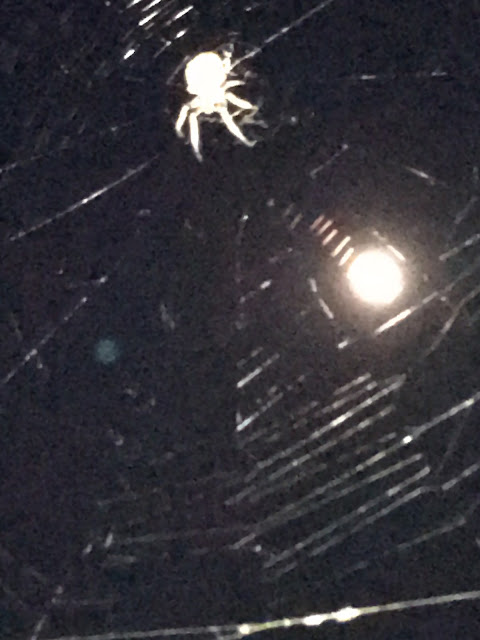 The spiders were out in full force, but they politely stayed on the side railing. This husky orb spider seems to have snared the moon. 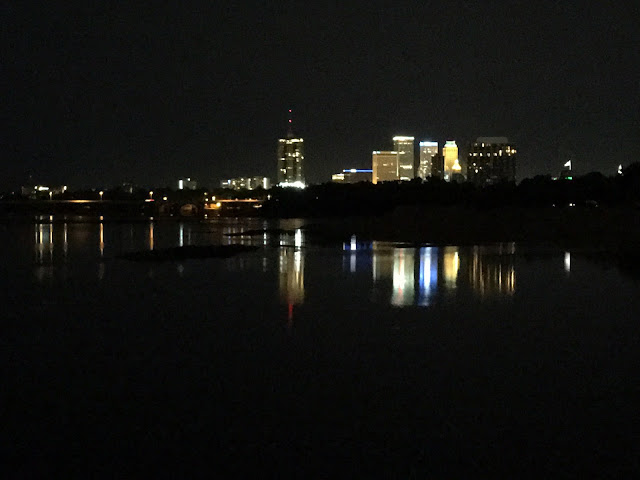 Calm water formed a brilliant reflection of downtown Tulsa. This was the best of several of my iPhone picture attempts.

Around midnight, the crowd began to dwindle. Despite being determined to finish what I started, the thought of quitting crossed my mind. I had entered the falling-asleep-on-my-feet zone--usually the beginning of bad things. I had run a few laps with Kathy earlier on, and I told her I was not here to practice DNFing. Spitting out things like that especially on social media is good reinforcement to NOT QUIT. 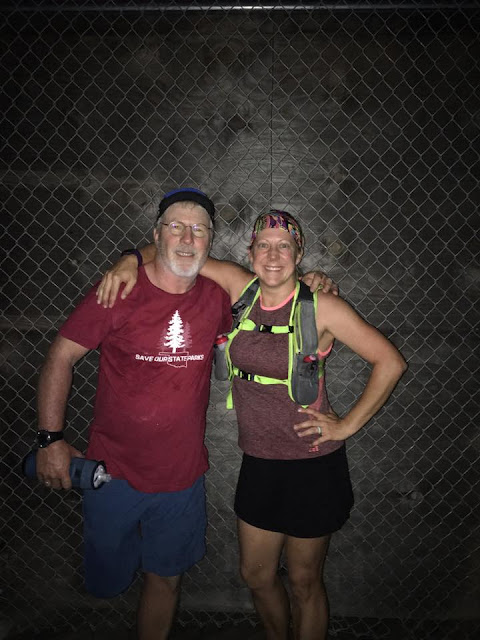 We finished the last bridge crossing in a sprint. Keep in mind that my sprint near the end of a long run seems fast to me, and would win no age group awards. 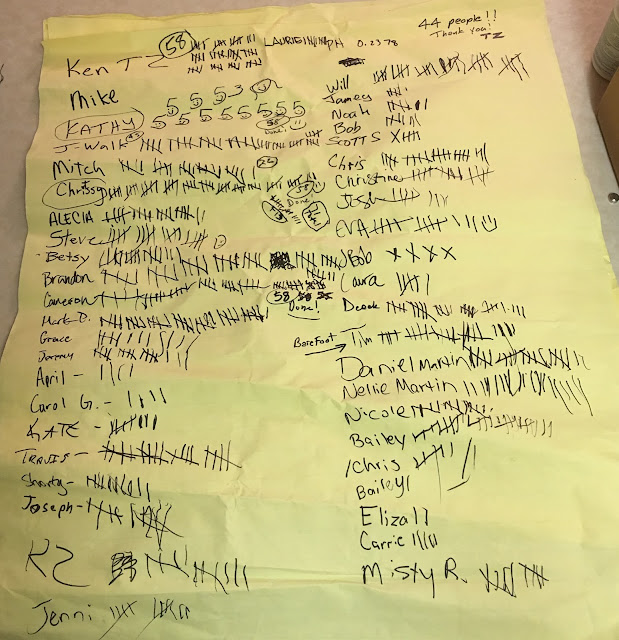 BfkaM had brought a huge poster for us to write our laps.
58 times, I made a mark on this page.
Kathy Bratton and Cameron Plate also completed 58.
Chrissy got in 58, and then stayed and ran 13 more with me for a total of 71.
Lots of other people ran over the half marathon distance. Thank you so much to all who came out!!
My running friends are the BEST!!

My friend Jwalk summed it up like this: He said he loved the bridge, but this would be the last time he ran it. He wanted to remember the last time as the Birthday Bridge Run.

Every summer around our birthdays (Mine is July 27, and Dana's is July 29) we try to schedule our vacation--but did not all come together this year. Dana was able to get off work, but we had birthday celebrations planned by our kids over the weekend, and a grandson birthday Monday night--plus I had to work Monday. So, what could have started on Friday or Saturday for a 6-day getaway was reduced to Tuesday through Thursday. But having family time is awesome too. 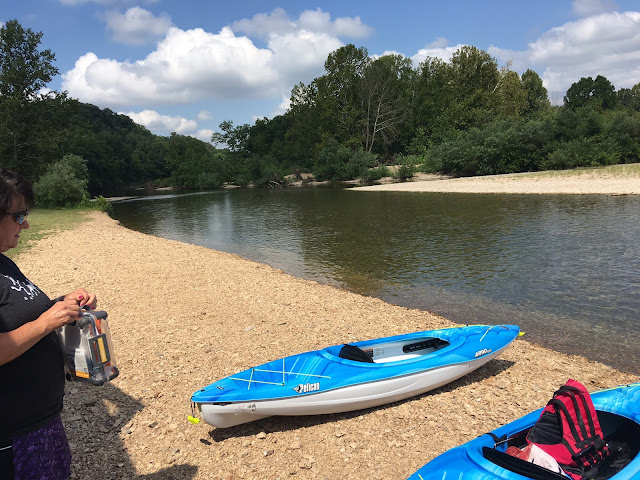 Dana and I scored matching kayaks for our birthdays, and we were itching to christen them. I thought the Elk River at Noel, Missouri would be a good place to ease back into the sport. Honestly, I have kayaked twice and Dana once--but I still feel like an old pro yakking. We have Pelican Argo 100s, 10-foot sit-inside kayaks, and we were both very pleased with how they handled. We paid River Ranch Floats in Noel $20.00 to take us upstream to their 8-mile drop point. The driver unloaded us as well as some other kayakers and rafters, and he had no more pulled away when I noticed my life jacket was still on the bus!! I called the main office and the courteous counter clerk said she'd try to radio the driver, but made no promises since radio coverage is spotty. :-/ But five minutes later she called back and said the driver would be on his way back. It did take another ten minutes or so, but he brought it back and was so apologetic, even though I told him it was my fault. I was impressed with their operation. They seemed organized, and they sure helped us out of a jam. 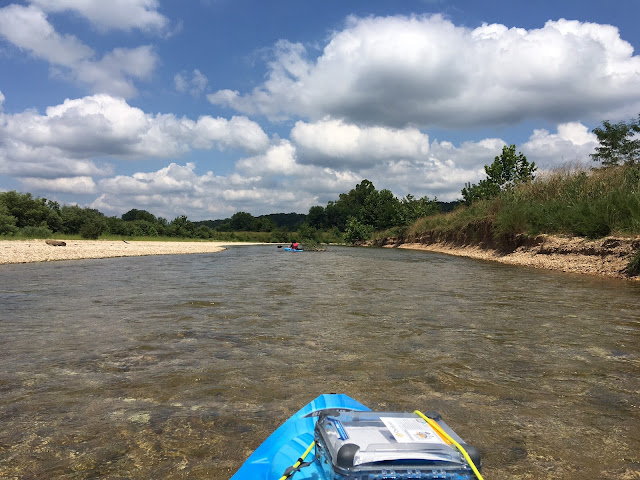 The weather was absolutely perfect. As you can see, partly cloudy with big fluffy clouds taking turns giving us shade that kept our un-sun-screened legs from cooking much past medium rare. 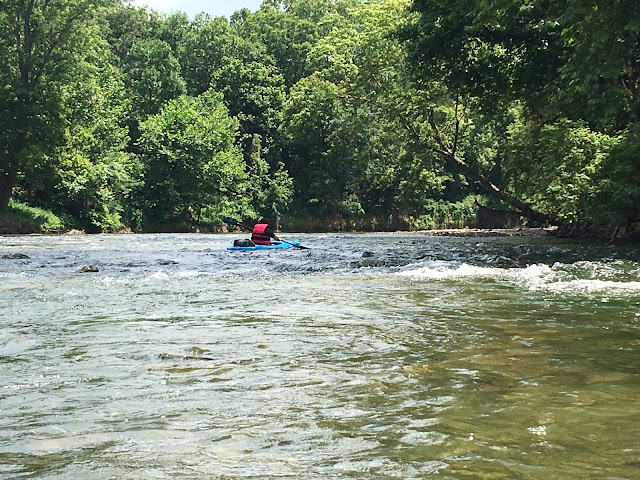 There were occasional rapids and only a couple of passages where there were enough big rocks to make you fret. One such place had a huge tree that was ripped out from a past flood that was tucked tightly along the bank of a narrow swift turn. I took a conservative track to the inside bend of the river with swift but shallow water. Dana drifted to the outside and got wedged against the big trunk of the semi-submerged tree. In a split second, she was hanging on while her kayak was swept under the tree. She hollered out that she might need some help. I quickly beached my boat and ran across to do whatever I could as she managed to get her legs out. Her life jacket kept her high enough in the water that she was able to keep from being swept under the log. She tossed me the soft ice cooler and her paddle, and I grabbed the tow rope and we pulled her kayak across the stream to more shallow water, flipped it over, and reloaded things. All was well, but had we not got my life jacket back--and with me being a sorry swimmer, she would have probably been swept under the log into a tangle of submerged branches. 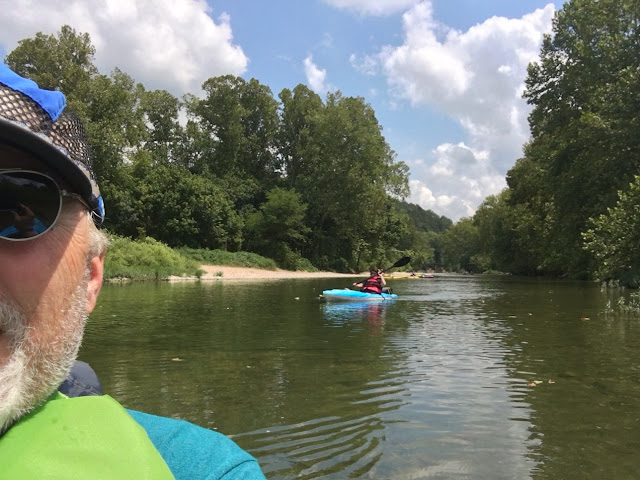 The only other bumps in the road were a couple of places where drub bottom. Good thing I had on my water shoes. 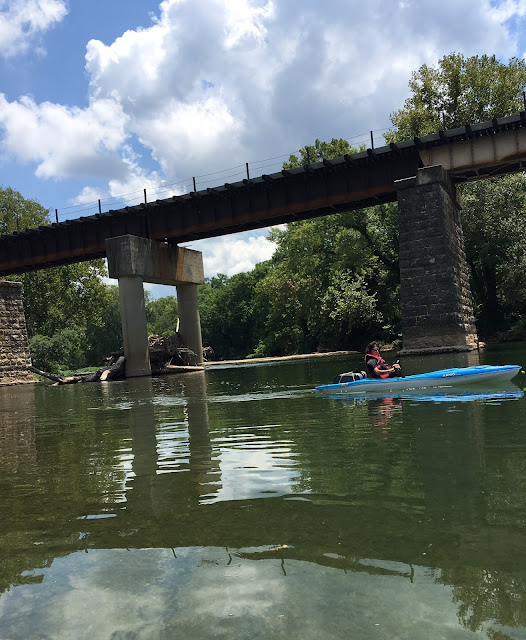 Our 8.25 mile trip took us nearly 4 hours, and at times, the sun would come out, the water was still, and there was no breeze. 82 degrees, while wonderful for August, can still seem hot. 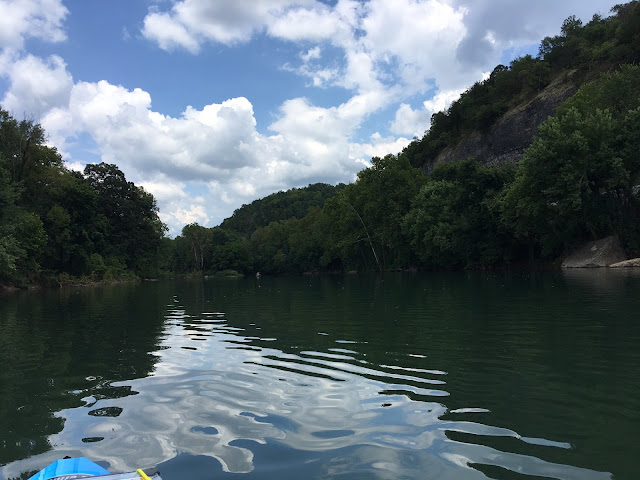 I could have gone a little further, but honestly, we were both ready to be through. Food had become a priority. Cotton Eyed Joes, known for great BBQ, also had great burgers.

Kayaking was the only adventurous excitement on our trip, but we did have one other fun excursion. 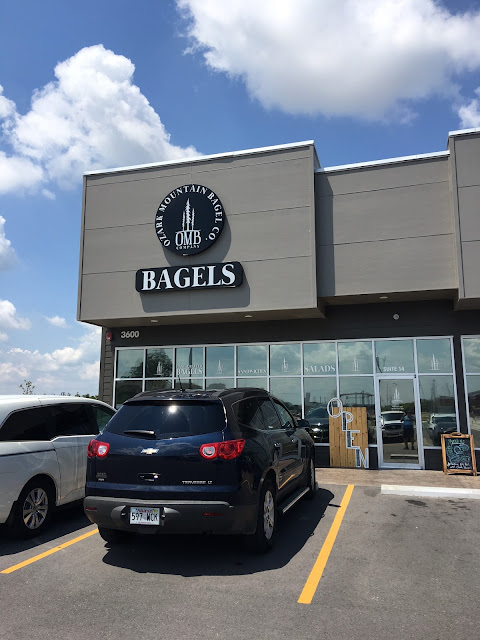 We drove home through Bentonville, AR, and stopped by Ozark Mountain Bagel Company. I was taking a couple of pictures of the new store, and we must have been spied as we were ambushed by the owners as we entered the front door. 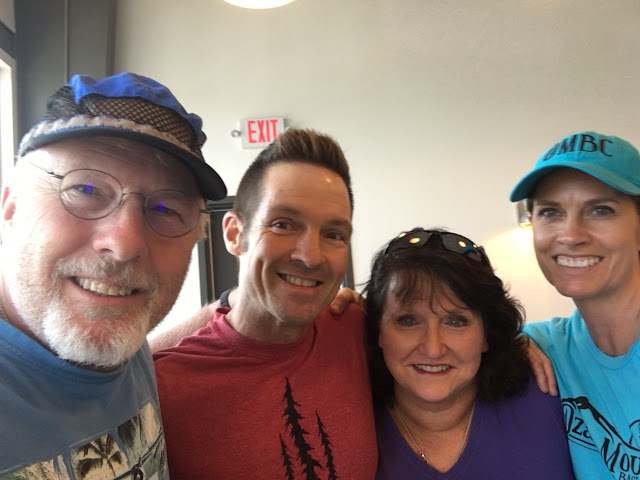 Bill and Sheila fixed us u with bagels and coffee to go (best bagels I have ever had too!) and a super cool Ozark Mountain Bagel shirt. We miss seeing our friends as often as we used to--but really, Bentonville is not that far away, and there are miles and miles and miles of awesome single track trailz here--and some good places to kayak too. More adventures are in store!!!
Posted by ....miles to go before i sleep.... at 10:50 PM No comments: