2012. This was my 11th running of the FlatRock 50K. It was also my first year to enjoy the perk of Knighthood as Sir Cargo--getting to endure several hours of tough running for FREE. 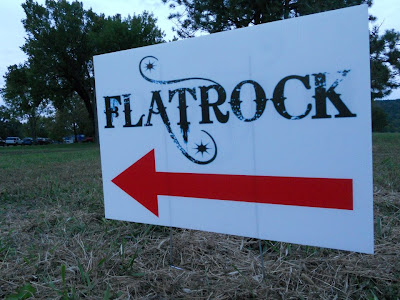 I felt woefully under-prepared this year though. Work has been busy. Our house deal, and subsequent move had virtually stopped my training. But three things gave me hope: 1. Lack of preparation = being well rested. 2. I was leaving my camera behind. Taking 30 pictures on the run translates to 30 extra minutes of time. 3. Course knowledge gave me a bit of confidence. Each year, this race seems easier, although my finish times would indicate that it's beating the hell out of me more every year. RD Eric has stepped up his marketing creating EPIC ULTRAS, a site promoting all of his races (all in Kansas) including a new 101K, and two new 100 milers. There were BE EPIC shirts everywhere! I bought one. I thought they said "BE ERIC". I think I will name the RD~~>EPIC STEELE. 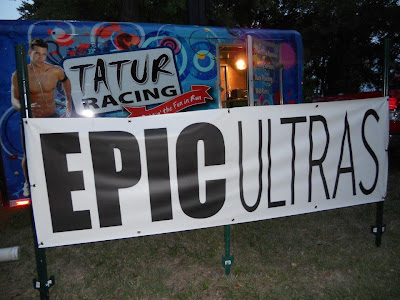 Brian and TATUR timed the event for the second year. This gave Eric more time for post race shenanigans which FlatRock is famous for.

In my books, FlatRock is also famous for the pre-race dinner on Friday night. Spaghetti and meatballs-- you can not get better grub at any race. These meatballs are to die for. I wish I had another plate right now. 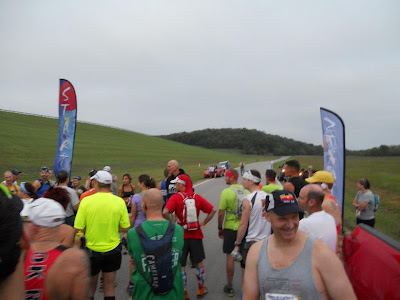 This is the pre-race mingling before the 50K start. In the singlet, Earl Blewett is in the middle of a sandbag session, claiming to be a lock for last place. he finished a couple of hours ahead of me--and I had a good race. Earl has a key place in getting me started in trail racing. I think Lake McMurtry 25K (where he was RD in 2003)was my 2nd trail race, and I was hooked. 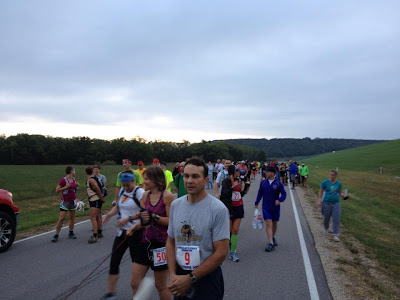 Steve Siegele (in the gray t-shirt) is poised to notch his 10th finish--which will earn him knighthood into the FlatRock Hall of Pain. 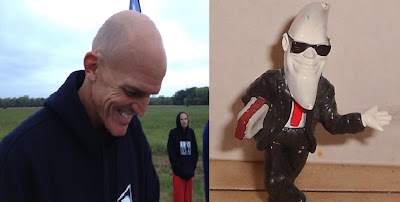 Eric "Epic" Steele calls roll, and tried to duck the paparazzi. I was going through my pictures, and noticed Eric bares a striking resemblance to a character in an old McDonald's commercial--Mac Tonight. 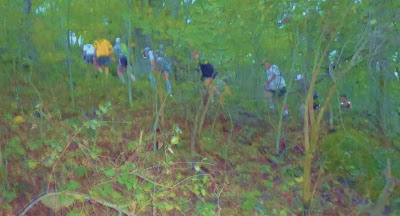 The race was off. A wee bit of pavement, a bit if grassy sidehill slope, and then single track--uphill single track. 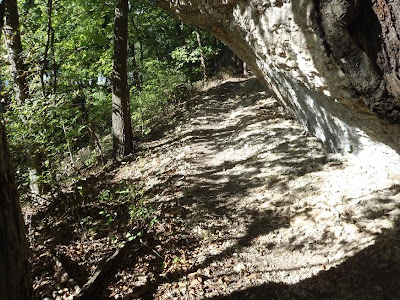 And then more and more of what FlatRock is. Rocks. 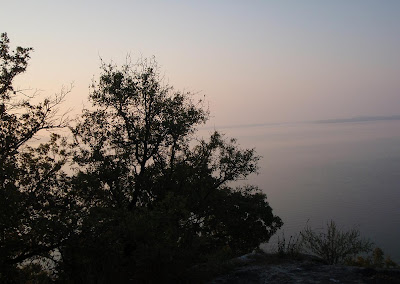 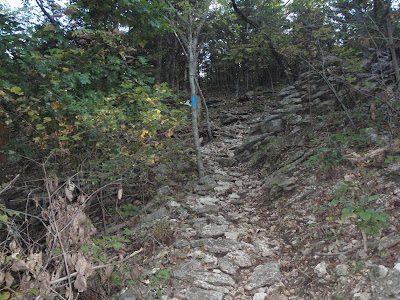 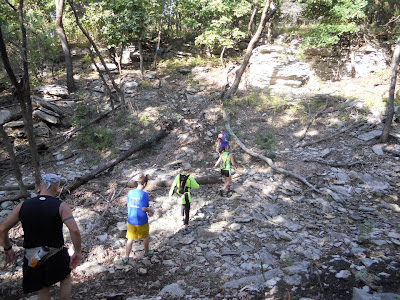 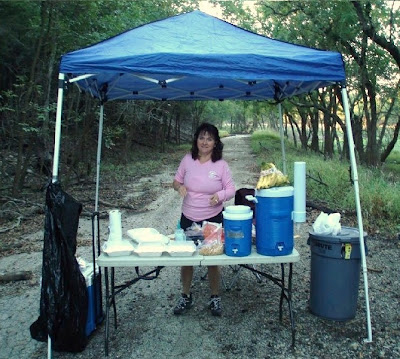 And aid station babes. Dana is a fixture at the Oak Ridge aid station. She had help from ultra superstar Tony Clark and Eric's sister Linda and her son Joseph.

I held a slow but steady pace, and was NOT IN LAST PLACE for the first 2/3 of the race. Upon hitting Oak Ridge on the way back, the temps had risen a little and I had ran dry on water. So, I glugged down some Coke, water, took a 5-Hour Energy, a Vespa, ate a piece of orange, a couple bites of peanut m&ms, a half a ham and cheese sandwich, and loaded up with two water bottles with H20 and Gatorade. I walked out choking down the remainder of my sandwich, and felt BLOATED. for the next few miles, I felt less than great. Not totally nauseated, but not well. I jogged, but walked a lot more that I would have liked to. I blew right through the next aid stop, catching a couple who were refueling. They passed me right away. I played cat and mouse with a couple of other runners. I loaned an extra ankle brace to a runner I played tag with (a guy named Eddie, who plans coming to Pumpkin Holler in a few weeks.) Upon reaching the last aid stop, where head banging music can be heard a half mile before arriving, I had my usual beer. I guzzled about half of it, and trotted on down the trail. The next 4 miles are the hardest on the course. 50Kers have 26+ hard miles on their legs and feet, and the ups and downs and rocks are demonic. But a funny thing happened!!! About 30 steps out of the aid stop, I burped long and loud, and was HEALED!! I felt like a thousand bucks, and tried to run and it was ALL SYSTEMS GO!! I ran all the flattish, most of the uppish, powerwalked the steepish, and bombed the downhills. I passed 9-10 runners in this last stretch, which solidified my placing AWAY from the last place slot where I have been parked the past few years. My rekindled "speed" got me in under 9 hours (an 8:45 to be exact) and I netted my best time in the past four years.

Russell made a great video of his trail run, and included footage of me loping across the finish line. I swiped a couple of frames above. 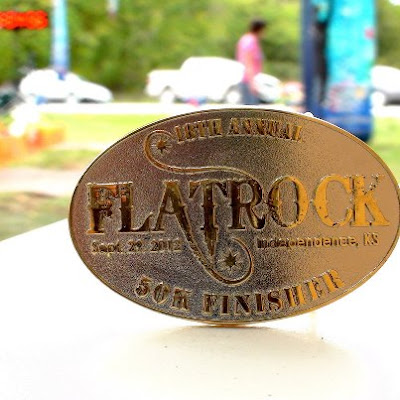 If fact, Russell gets most of the credit for the pix in this post, including the shot of this AWESOME BELT BUCKLE for us 50K conquerors. 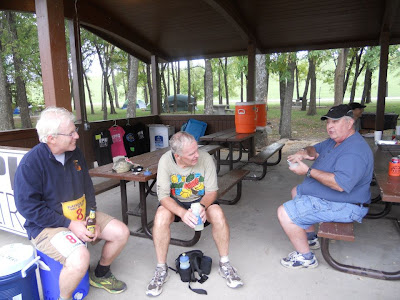 We three have a lot in common. On the right, Dave Dinkel is the first Knight of FlatRock--Sir Blue Flame. Dave is a guy who has a magnetic personality and also had a great part in luring me into the zaniness of FlatRock. Dave has slowed down in the past few years, and I have assumed the assumed the last finisher status. This year, Jim Perry put the finishing touches on the race. Jim and I have raced against each other for years. Many a year, he has finished one spot ahead of me. This year, I bested him. I am sure we'll be battling it out again soon. He is a great competitor, and I enjoy running with him. 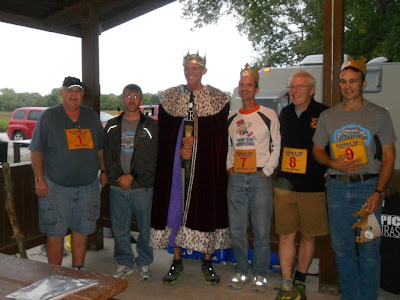 The knighting ceremony was a hoot, as brother Steve was knighted Sir Faithful--for his years of unselfish help with trail work at FlatRock. As I understand it, this is the only ultra Steve runs, and is consistently a 6 hour finisher. The Royal Order of the Knights of the Hall of Pain from left to right: Sir Blue Flame, Sir Last Minute, The Epic King, Sir Slam, Sir Cargo, and Sir Faithful. 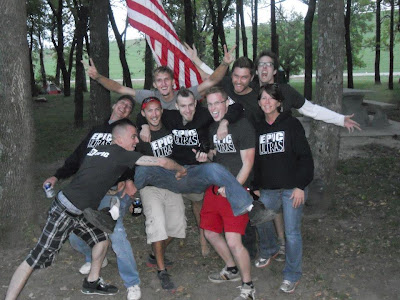 A plethora of Epic Volunteers. (Polly--RUN while you have the chance!!) 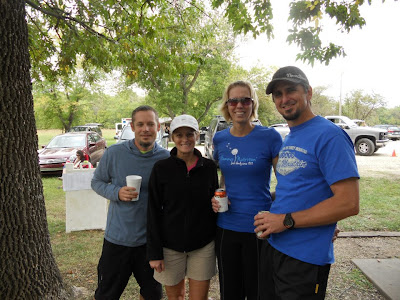 I did not get to see any of the 25Kers, as they start an hour after we do, and they finish WAY before I do. But Paul, Cassy, Amelia, and Jeff made the trip from Tulsa, and had splendid races. 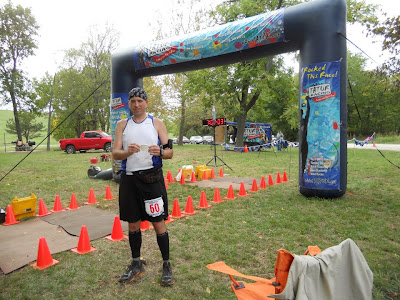 Special thanks to Russell again for his picture taking. Russell finished in 6:46--over an hour better than my best time ever. Dude is getting fast.

Results can be found here.

Email ThisBlogThis!Share to TwitterShare to FacebookShare to Pinterest
Labels: FlatRock