My absence explained, and another of my favorite trees.

I have been an AWOL blogger lately. This is the longest I have gone between posts since--well, forever. But I have a good excuse. We closed on our new (to us) house on September 27, and the week(s) preceding that were filled with jumping through hoops gathering info for the underwriter of our loan. Throw in some busy times at work, and I had no time to ponder the meaning of my life and post. I did get in a post while licking my wounds after FlatRock, but from there on, I was consumed with moving, and more stressful, removing all the STUFF we've accumulated over the years. Given a house with 2200 sq ft plus a full sized finished attic plus a large out-building, all the leftovers from aid stations at our races ended up in tubs in the attic and garage. A big house holds a LOT OF JUNK, and move all of it to a smaller house with no attic to speak of, we were an episode on Hoarders waiting to happen. (Do those folks get paid for being on the show?)

There was no since of urgency to be out, other than we wanted to get it over with. We told out landlady we would be out by the 12th, and as the days slipped off the calendar, we were finding it a near impossibility to get out and have the place spic and span clean. We hired a moving company to move the big heavy stuff. They were ok, but not great. My amazing friends Derek and Laurie gave us tons of boxes, and we packed and drove our stuff a carload at a time the 1/4 mile from old house to new. Brian loaned us his Ford pickup with a full size 8' bed. We put a good 12 or 13 miles on it over two weeks. Today was carpet cleaning day, and we were ready, but barely so. While I waited for them to finish, I patched a couple of places in the garage where bike pedals had scraped near holes in the sheet rock, and where Buster, or Edward Scissorpaws cat has shredded the wall. I spent the remainder of the day dragging a thousand pound riding lawn mower that had not ran in 7 years with two low tires and two rotten tires across a mole infested back yard, and onto the street. I then pondered how in the heck to get that onto Brian's truck. Turning to Google, I found a guy who would come and take it away along with two shells of push mowers--for a price. Then, I had to remove Jake's dog run, some back breaking work. These fence panels nearly topped off a large construction dumpster. A clean house netted a full refund of our deposit, which in turn paid for the dumpster, the haul off fee on the mowers, and the carpet cleaning. We enjoyed Red Robin and a dip cone from the Golden Arches, and had 17 cents left over.

But best of all, we are THROUGH with moving. I managed to hook op my computer without losing my patience and mind. There is enough of me left for a couple of paragraphs of rambling, no? I am quite happy, even though I have ran very little in the last few weeks, save a 4.4 miler with Simone tonight.

What is a post from me without pictures? I am sad to leave a tree in my old front yard. It is a Bradford Pair, and was split to the ground along with it's two brothers in December 2007 in the worst ice storm Tulsa has ever seen. We had made our way home from a Sunmart/WhiteRock double and git into bad ice on the way home. Transformers were exploding while we entered Tulsa, and by morning, no one had electricity and we all were without it for a week or more. Monday morning, in a dark house with no heat, we heard explosions all over the neighborhoods. I heard a super loud crash in our front yard, and a tree had split from the top to the ground and laid over our Jeep, and Prius. While cussing and wondering what to do, the one next to it laid down splitting into several sections. We lost all three beautiful trees in a matter of minutes. They were cut up and hauled away, leaving only one foot stumps. The center tree, the one that sent shards of ice flying against the wall of the house and at me as well, refused to die. Come spring, several shoots emerged around the perimeter of the stump. I let them grow, and it really looked pretty ridiculous, but I admired it's will to live. The next summer, it was 12 feet tall, and actually looked kind of like a tree or at least a significant bush. Five years later, it is a work of art--Nature at her best. 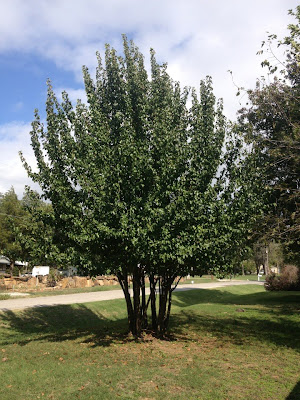 I selectively removed inferior shoots that seemed to me to choke off the sunlight from the other shoots. I am no arborist, but it seemed good to me. 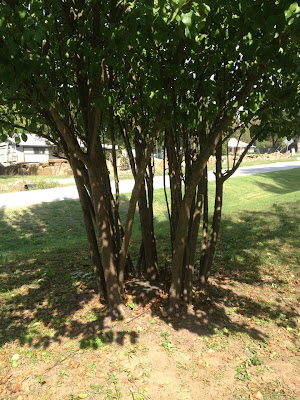 The center of the tree made a mini jail. My granddaughter calls it her cave. That is the one thing she asked about when she knew we were moving--what about her tree??? 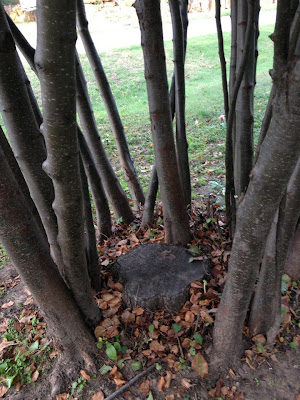 This tree that would not die, is now amazing. Some of the trunks are 4 inches in diameter. It will someday be the most majestic tree on the block. If the new tenants do not see the beauty in it and cut it down. 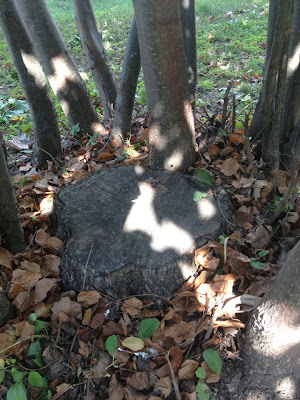