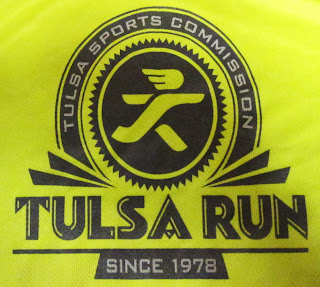 Despite my dislike of the course changes--mostly an out-and-back on Riverside Drive, despite the long lines at the expo, despite new people running the race and old friends being moved out, I still love the Tulsa Run. In 2002, I had ran one 5K prior to running my first Tulsa Run. I ran it in 25 minutes or somewhere around there, and stayed around to watch some of the 15Kers come in. I was amazed and certain that I could NEVER run 9.3 miles, It was just not physically possible for me. I saw the winner come through, and they were gazelles, elite athletes. I saw one dude come through, and put his hands on his knees and hurl all over the finish chute. That was proof that running a distance that long was unwise.

Then, the mortal runners started coming through in waves. People just like me, running easily, laughing, enjoying the run like it was nothing hard at all. WOW!! Could that even be possible?? That is how it all started for me. A half marathon was on the slate the following March, then a 25K trail race in April 2003. I ran my first marathon in OKC, then my 1st 50K in September (FlatRock!)

I think I will always be a runner. I think I'll always run the Tulsa Run.