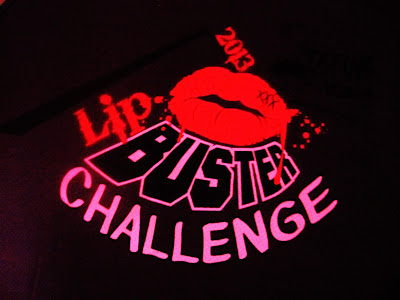 June 16, a Sunday, make your way to the Turkey Mountain Urban Wilderness, and come early. Come participate in a running event new to the Tulsa area, theLipBuster Challenge, in which you do not run a predetermined distance, but run for a predetermined time. Like the Snake Run, held in March, where you run for three hours or for six hours, in this event, you run for an hour. That's right--just a measly 60 minutes. No problem, right? Well, here's the challenge--the course is a 1/4 mile out, and then back. You repeat this for an hour. You needed a nice weekend run anyway. But I have to tell you the fun part--the 1/4 mile is UP the hill on the trail that runs parallel to Elwood Avenue, affectionately known asLipBuster.
The swag is good for this first year event. Very nice tech singlets are given to the first 120 runners, and all brave souls who make it up and back down at least two times, are awarded a beefy medal that assures bragging rights among your friends who just don't like hills. 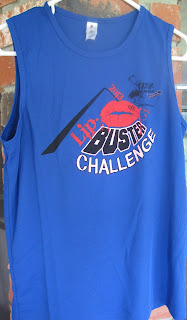 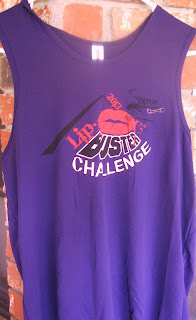 The ladies singlets are royal blue, and the men's are purple. They are gender specific, but we have no problem with a woman opting to take a men's and vice versa.

I have been asked several times about the course. For those who have not ran trailz at Turkey Mountain, this is a great trail for an sweat-fest workout. I have friends who seem to delight in doing repeats here. Knock out a half dozen ups and downs, and you have burned off that cinnamon crunch bagel you had at Panera's. We have made the course exactly 1/4 mile each way to keep it simple. Half of this route is relatively flat (I just LOVE saying that!)

From the start until the electronic tower--about half way--you climb 36 feet. From there, you'll climb right at 100 feet in an 1/8 of a mile. Piece of cake the first time up, but it'll be more fun the next 10 or 12 times. 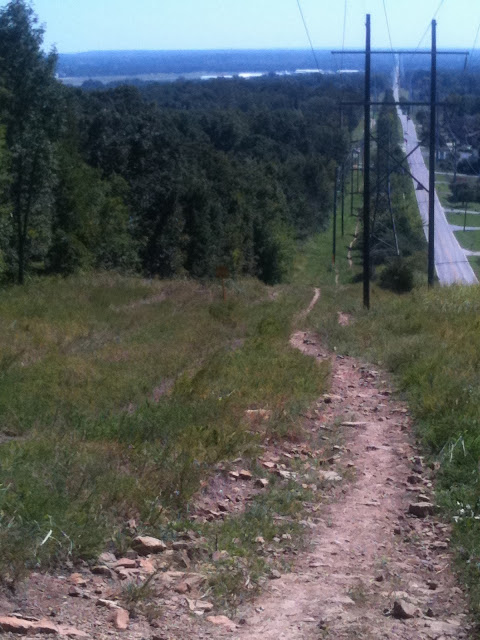 Here's a view from the near the top looking down. Yes, you can run like the wind going down, but watch your footing. This is where the hill gets it's name. The flatter half is what you'll love. A gradual decline is where you can make up some time, and for the competitive spirited runners, I expect we'll see them flying.
There'll be a well stocked aid station at the bottom with the usual aid station fare. We'll have plenty of first aid stuff too. I've heard rumors of an unofficial aid station and cheering squad at the top as well.

There will be three heats, the first going off at 7:00 am. This heat will fill up soon, as a lot of smart people want to get their hour of hill climbing done before it gets too hot, although I bet there are a few going early just to make sure we don't run out of beer. The second wave is at 8:15, and it is a competitive heat. This is for those who are determined to run for the whole hour, and who think they have a good shot at winning. There will be cash prizes for the top three male and female finishers, and this should be intense. If there was ever an exciting trail running spectatur event, this is it. We may need to put out a "designated throw-up area." The third heat is at 9:30, and this is for people who want to do the event without the fear of getting ran over by those running like their hair was on fire. I, TZ, will be running this heat. I will subject myself to my own torture, and I may or may not spend 60 minutes doing so. (Oh, actually I am sure I will be guilted into going the whole hour!)

So, what's the payoff for doing such an event? Well, cash prizes for the top three in the competive round. These amazing medals (below) for everyone who goes up and down at least twice. 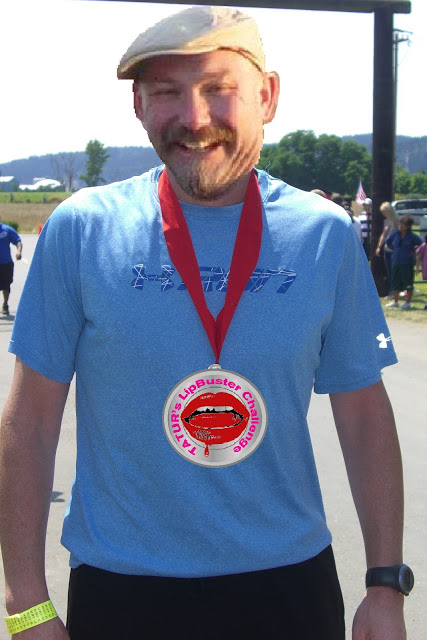 But beyond all that, you'll have bragging rights. And maybe a little souvenir too! Busted lips can be quite fashionable, and dare I say, even sexy.

Well, some sexier than others. Don't miss this event. If you can't see yourself going up and down 136 feet in a 1/4 mile TWICE, then come out and watch. And stay around to laugh at me after 50 minutes of torture. See if you can shame me into going up one more time.