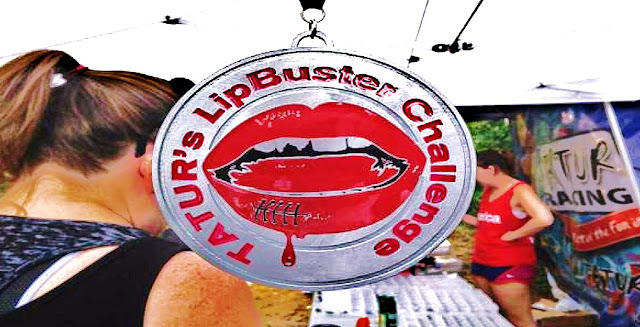 Sunday morning, 69 runners came out to Turkey Mountain for a little 1/4 mile run. Up a hill. Then, ran back down. Then up. Then down. and repeated the madness for an hour. And all for the slab if metal above. It was the first year for the LipBuster Challenge. Many trail runners missed out, but the ones who came out have some serious bragging rights. 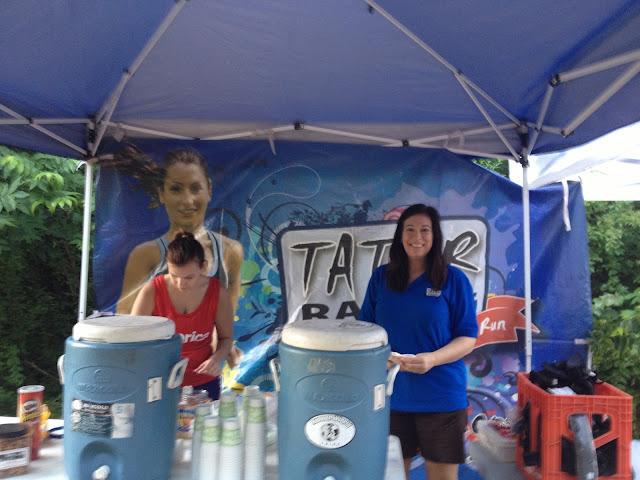 Brian and I met up at 4:00 and began setting up the starting line, timing mats, and aid stations. This was actually a pretty easy race to put together. Course marking was a breeze. And the aid table at the top of the hill had only a table and a water jug. It actually had a couple of canvas fold-able chairs--Wal-Mart specials--that some PEOPLE OF WAL-MART stole right off of the table. Thank you, jerks! But We had spectacular help from Elise and Michelle, and also from Andrew who I failed to get a picture of. Arnold Begay ran the race and helped tirelessly in packing things up. 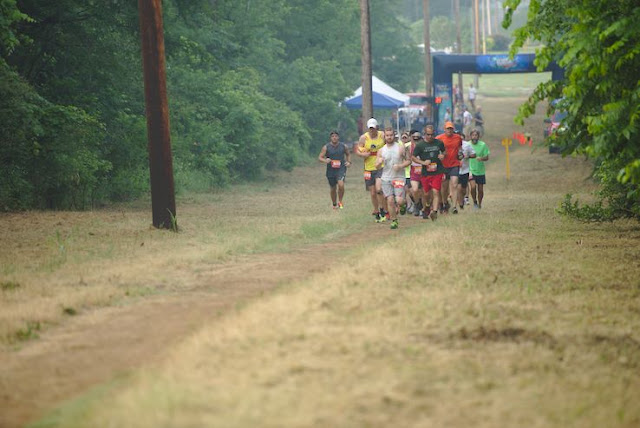 At 7:00 am, Brian and I sent the early heat off. These folks thought they were playing it smart by running early to beat the heat, but the humidity was 99%, and there was not a hint of a breeze. Sweating was the norm, and you coulda peed your shorts and no one would have noticed or cared. 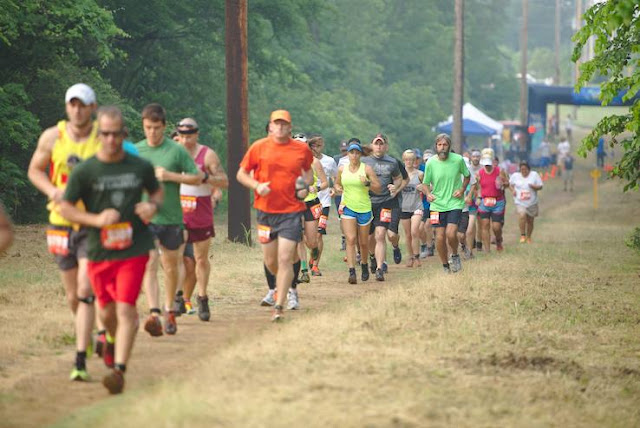 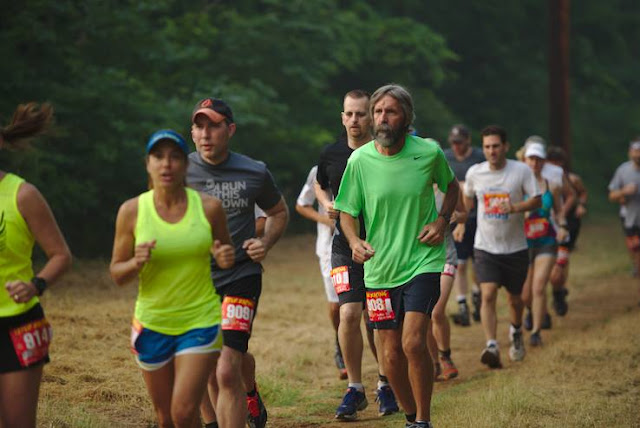 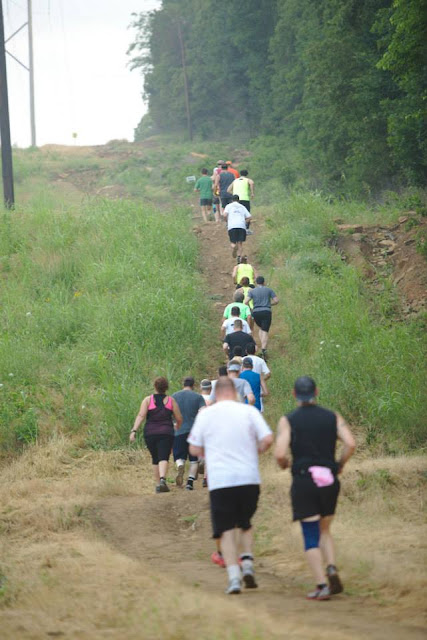 Dannielle Huddleston took these pics of the ambitious throng of 7:00 am runners. They got spread out pretty quick, with only the first lap having any significant bottle-necks. 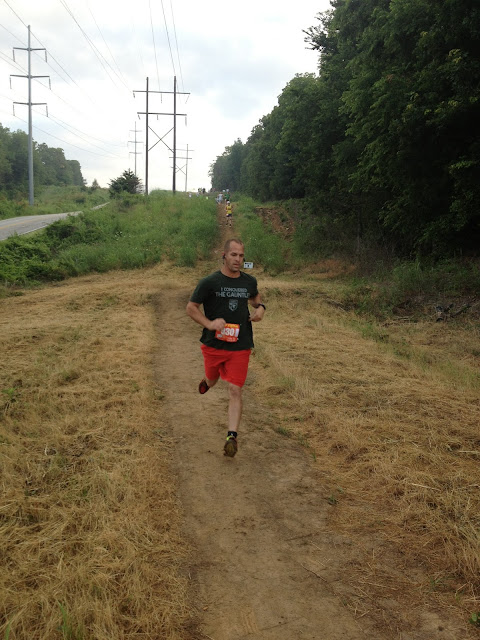 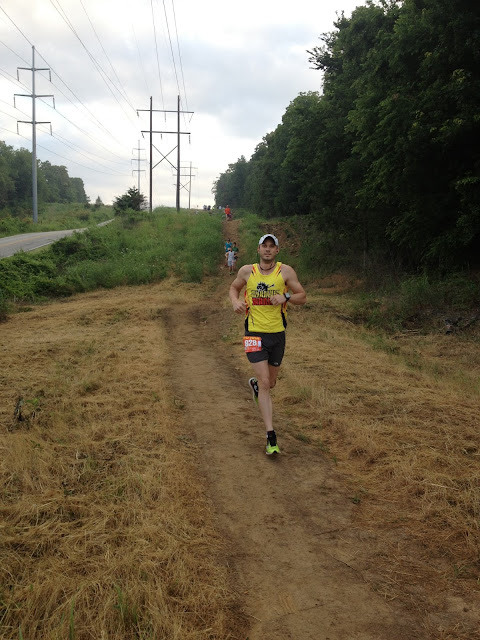 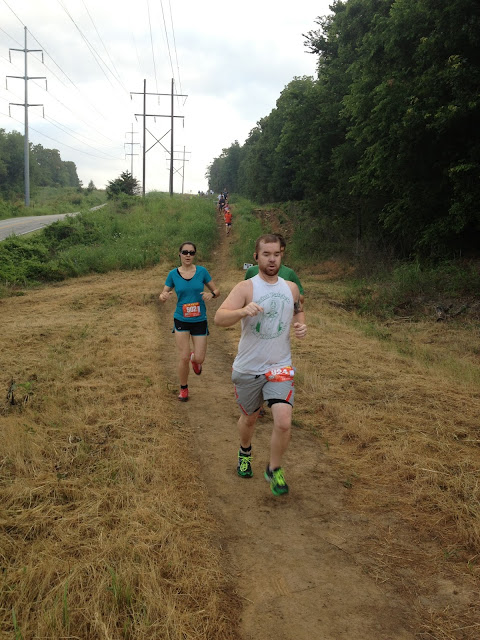 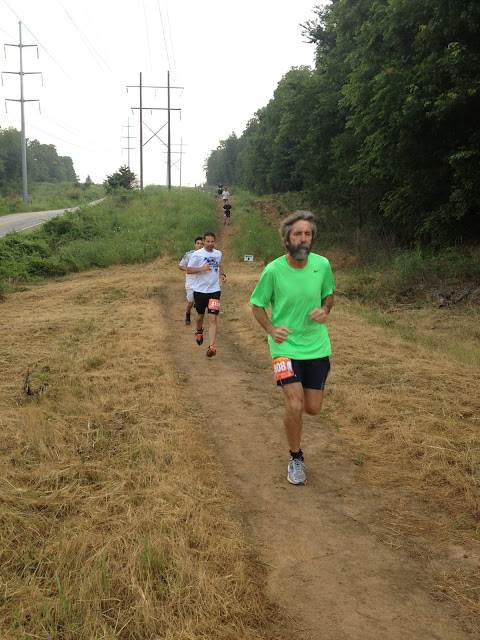 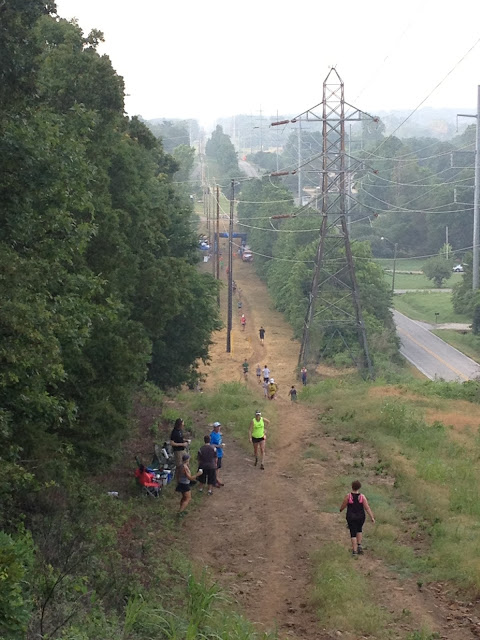 I headed up the hill myself to take a few pictures. My plan was to do the 9:30 heat, and didn't wanna overdo it. Eight of the 29 runners in the first heat ran 10 laps. That's 1,360 feet of climb in 5 miles. And that's with almost all of that climb in the second part of the way up. 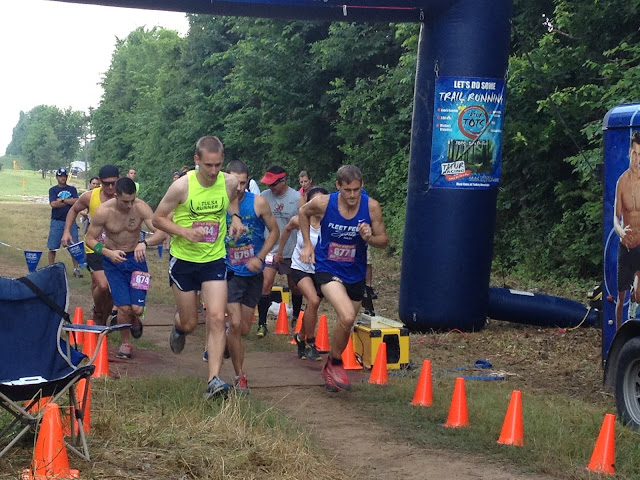 Eleven runners were in the 8:15 competitive heat. This heat was for those who were intent on hitting it hard, and there was prize money for the top three males and females. Seeing as there were only three women entered, it was a payday for all of them. 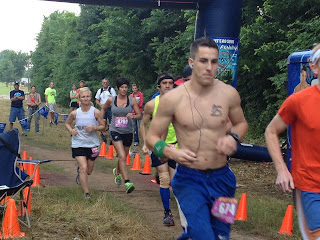 Video courtesy of Bob Doucette. Justin Franklin ran like a machine, and turned in seven miles and over 1900 feet of hill climbing in less than an hour. 14 laps. 14 repeats. There were two runners who managed 13 laps each. Zombie-friendz Edward, Christy, Stormy, Bill, Kristina, and John manned a cheering station with a quick hand-off-beer-swig for anyone who wanted one. 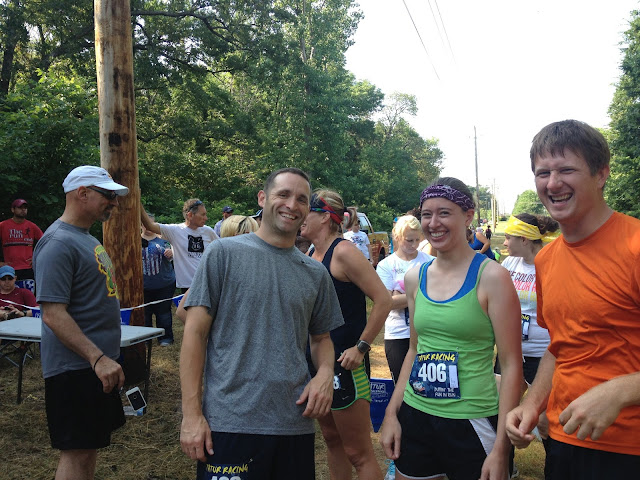 Here's my competition, and this trio of runners all beat me. This is Elizabeth, who came over from Arkansas to get in some Pikes Peak training. She ran 9 loops in the 7:00 am heat, and then added 8 more in the 9:30 heat, making her the queen of repeats. 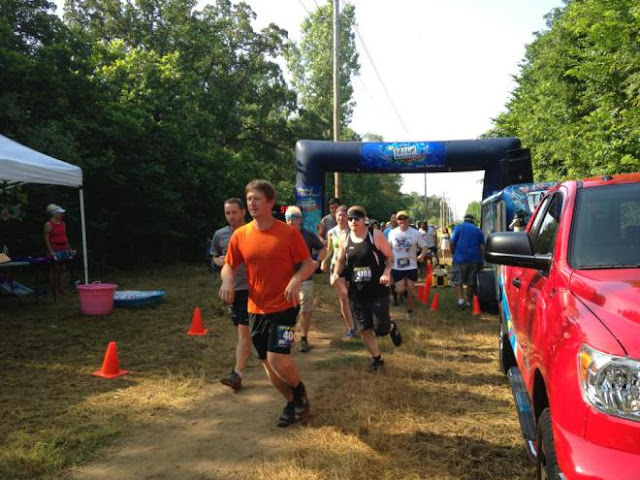 I started out near the front of the pack. That's me with the blue bandana. But by the time I got to the steeper climb, most of the field had ran past the shuffler. Thanks to my friend Bob Doucette for the above pic and the two videos. 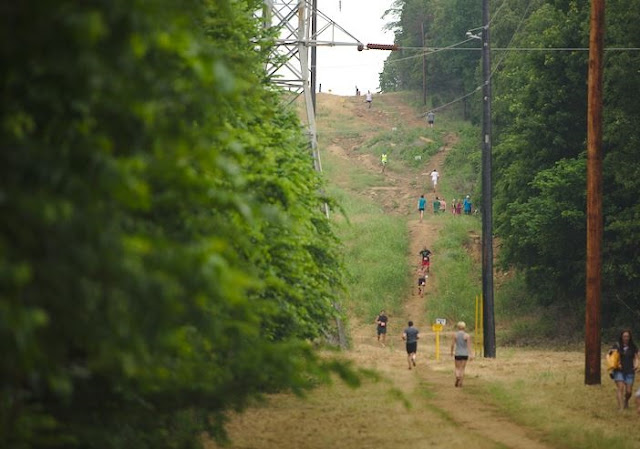 I jogged all the way to the base of the climb, and power-walked the rest of the way to the top. About 50 feet from the turn-around, I'd start the shuffle, and then bomb the downhill hard all the way to the start/finish, and then jog back to the climb. all but one of my splits were under 7 minutes, and my last split was close to being my fastest. I crossed the finish line for the 8th time and had 5:51 to get in another one. I was bummed but just a little. 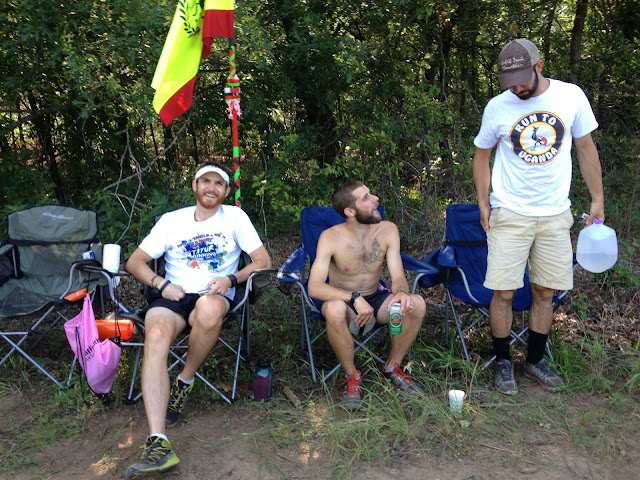 My 6th lap was 7:09, because I had paused to drink an extra couple of gulps of a beer, and a quick cup of water at the top. Then my last two laps were progressively faster--but I would have to beat my fastest lap by 30 seconds to get one more in. If the gun sounded and you were even 10 feet short of the finishing mat, the lap did not count. I was kind of glad it was a mathematical impossibility to give it a go. 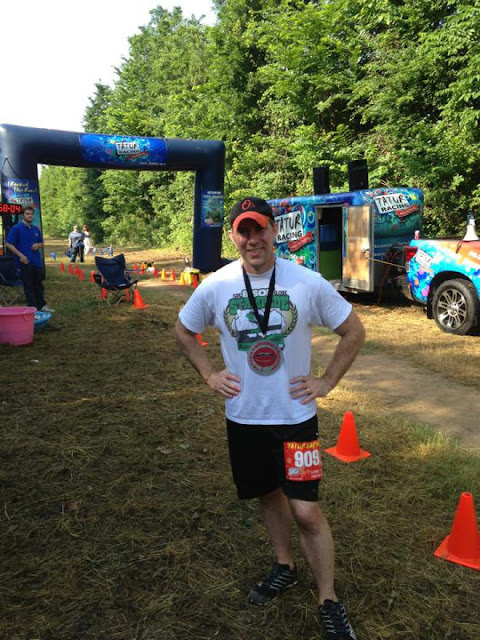 Bob ran the 7:00 heat, and stayed around to take pictures and movies. Read his report here. 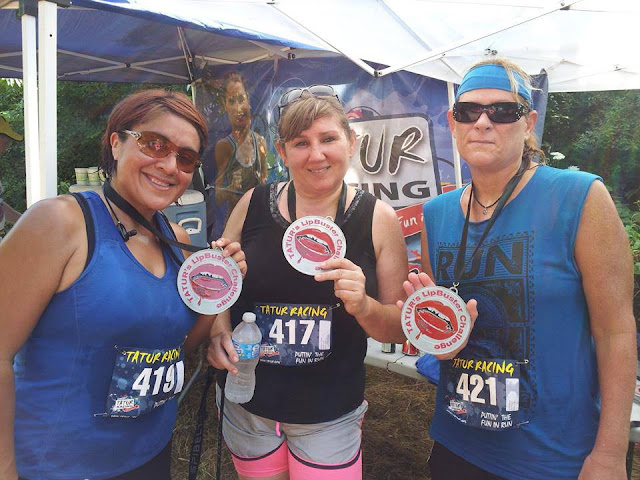 The awards were well received. Blingus extremus. These almost need to come with a wheel barrel to tote them around. I almost got a hernia toting the boxes of them around. Most everyone seemed to like this--paying money to come out and suffer running up hills for an hour. I think this race is a keeper.
Posted by ....miles to go before i sleep.... at 10:47 PM