Today I was reading the Runner's World Online Forums and found this thread about states with the best trailz. I knew no one would consider Oklahoma among the best although we do have some cool trail systems here and around. Colorado, Oregon, California, Utah, Virginia--and a few other states were mentioned repeatedly. Do you like mountains, even with the technical rocky sections and nose-bleed altitude? Trailz graced with miles of lush green? The solitude of the open prairie? A postcard pretty view of a lake or a river or a canyon? All of the above?

If I were to move to a different part of the states, having great trailz to run on would be a major part of my decision. I might even relocate based mostly on the proximity of miles of sweet single-track. But don't think I am dissatisfied with my dirt and rocks here in Oklahoma. I LOVE IT here. My trail radar is keyed up, and every week or so I find or hear of another trail just begging for me to run it. Pumpkin Holler, while not technically a trail, is such a great place to run. So much so, that I plan to submit myself to a 101.5 mile beating in a few weeks. (Whip me, baby!!!) Now that tick and chigger season is past, I will explore a few possible gems that I have marked for exploration. I am in a good place.

But tonight, I found something that turns makes my head boil. Running on the west side of Turkey, I found something that I knew would probably happen all too soon. After Turkey Mountain Urban Wilderness got the gas utility company to barricade off the access road they have for their pipeline maintenance, some low life plowed their 4-wheel drive pick up into the woods making another road for ignorant stupid inconsiderate slobs to drive in and dump their trash--AGAIN!!! 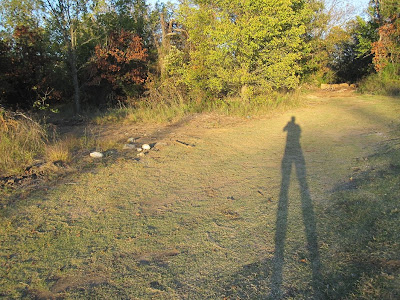 To the right you can see the large rocks that were placed to barricade the road where too many imbeciles were dumping. A few months back, a group of volunteers spent a long Saturday afternoon cleaning up tons of their dumpage, and before the gas company could put the large rocks in (they said they were going to install an iron gate), some billybob dumped a load of rubbish the day before the rocks were placed. That pile of garbage has been there ever since--right by a major trail where Turkey and TATURS runs by, and several mountain bike races ride by. What a great thing for out-of-towners to see. In the above picture, to the left is the new road Bubba cut for his trash buddies. and here is Bubba's new pile of trash. 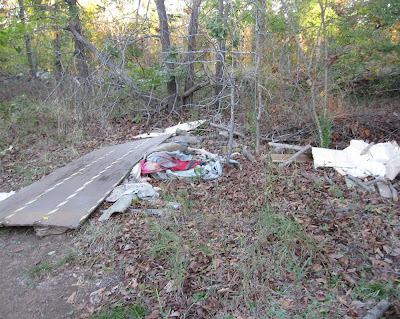 Know this--one riled TZ is gonna bug the crap out of the Tulsa Police, the sheriff's dept, the gas company, The Tulsa World, Channel 2, 6, and 8. I'll rally the Turkey Mountain Urban Wilderness group, TATUR, the mountain bike groups, and anyone else I can find/bug. I am SICK of idiots thinking it's ok to dump trash in our playground. And another thing--the mile between HW 75 and Elwood along 61st Street is where a lot of soulless people drive by and toss trash out their windows. Hurricane Malt Liquor cans, Bud cans, McDonald's sacks full of junk food trash, diapers, QT cups, plastic bottles, meth labs, and more misc kinds of trash than you could imagine. Several times a year, either friends of RiverParks, mt bike groups, trail runners, prison inmates walk the road and pick up several bags of trash--I'm talking 20-30 large bags. I walked the mile once all by myself and picked up over 10 bags. How long does this last? Only a day or two. A week later, the mile is litter strewn.

This is NOT ACCEPTABLE. If this were happening at a "more prestigious" area, say around Woodward Park or along the river parks along the east side, there would be a huge police movement to catch the slobs who litter, and the trash would be immediately cleaned up. These slobs who litter and dump--if someone threw trash out in front of their house, or dumped garbage in their front yard would they not be furious? Anyone would be livid, no doubt.

Turkey Mountain is one of Tulsa's treasures. It has the best trailz in the area, and is truly a draw bring in lots of out-of town visitors to run, hike, and bike. Trash laying around makes Tulsa look bad.