My training--such as it is--has consisted of weeknight dog walks and races on the weekends. My goal race (or at least the first tier goal race) is Honey Badger--a 100+ miler in the flatlands of Kansas--that wide spot in the middle that has no trees. It has a 36-hour time limit which is only there to make it seem badass. The only thing hard about it is the potential for hot weather--July 7 on rural paved roads with zero shade--yep, it could be hot. So, to train for that, I need long slow runs in the heat, and War Eagle fit the bill. 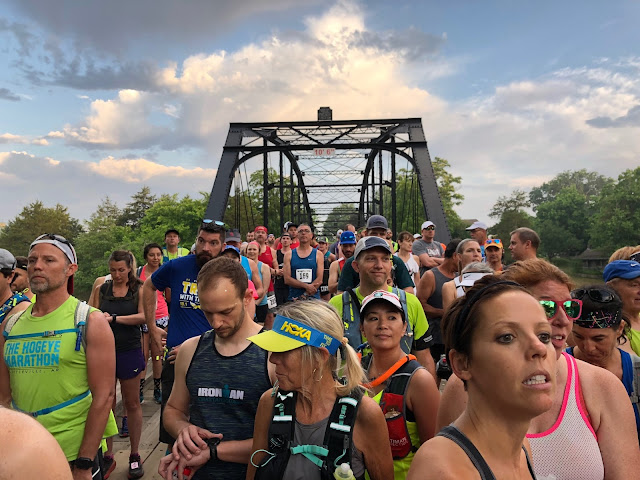 I remember this race when it was just a fat ass run--way back when the fatass description brought raised eyebrows and pissed off looks from anyone who's butt was bigger than medium. Probably less than 100 runners showed up to run on these winding twisting single track trail system. The race then was actually called the Tail Twister. Today there were 567 finishers, and probably a few who just threw in the towel mid-race, and a few who stayed at home under the covers.

Due to the RD sending the crowd backward across the War Eagle bridge to an imaginary starting line, I started the race near the front of the pack--a freakishly strange spot for me to find myself. My plan was to run with Lynna, and did for about a quarter mile. I had the everything-malfunction going on. My pack was strapped on one notch wrong, one shoe was too tight and one was too loose. No wait, they were on the wrong feet. One Injinji toe did not feel right. I needed my bandana on. Bitch bitch bitch. I walked and fixed my pack, tied my bandana on, and decided to just suck it up on the shoe thing. Since by then, I was at the back of the pack, I ventured off on a gravel road to pee, and now was in my comfy place--way back in last place. 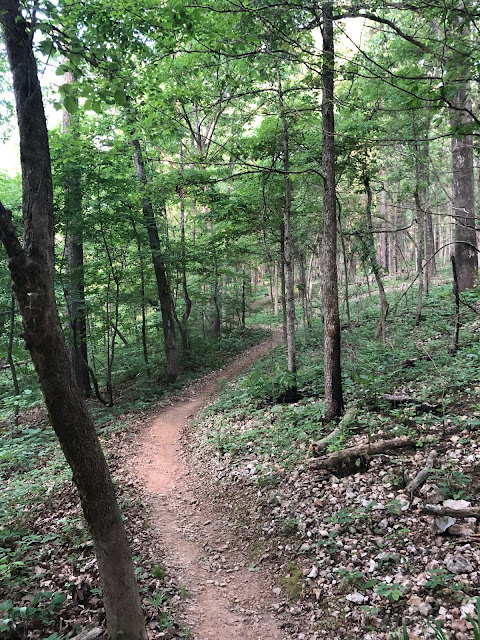 So, most all of my pictures were just of the trailz. And what beautiful trailz they are--very well groomed without many unnecessary switchbacks.  The tree cover was thick, and the skies were mostly cloudy for the first part of the race, and I lost my sense of which way was north or any direction. I knew up and down, but it seemed like for the most part, but had no clue of how the course would take me. Fortunately, it was very well marked. 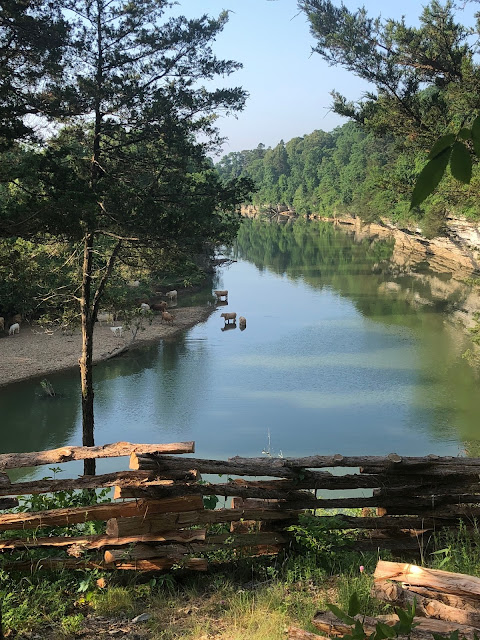 At one point somewhere, there was a splinter tail that seemed to lead to an overlook. I took the turn and saw a group of cattle enjoying a float trip. I got passed here by some people who either got lost, found a porta pot and let the old guy pass them. 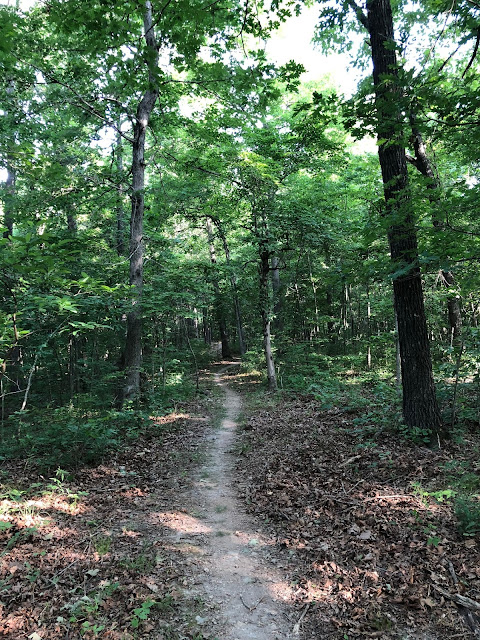 This is what running is supposed to be. Just dirt, trees, and a breeze here and there if you're lucky. The 25K ran one big loop. The 50K ran two of these loops. It gets confusing here though. They also had another small loop that they had to do. The starting line and the finish line were at different places. The 50K did not return to the starting line, but their second loop was short so they added on X amount of mileage to make it 31.1 miles. If that makes sense, then I have done a good job of splainin' it. It was my goal to not be lapped by a 50Ker. If they lapped me, then they were going more than twice my pace. (Ok, I am really slow.)

Because the 50Kers had this longer 5K-ish loop to do, I got ahead of a lot of them. I started getting passed by a LOT of runners, and they were actually not all that much faster than what I was able to do. It took me a while to figure out who these people were. Once I did, I felt relieved and started tucking in behind them and matching their pace. I reeled off a few faster miles in the latter part of my loop. Eventually, I did get passed by the 50K leaders though. It was easy to tell who they were because they about blew me over when they zoomed by. 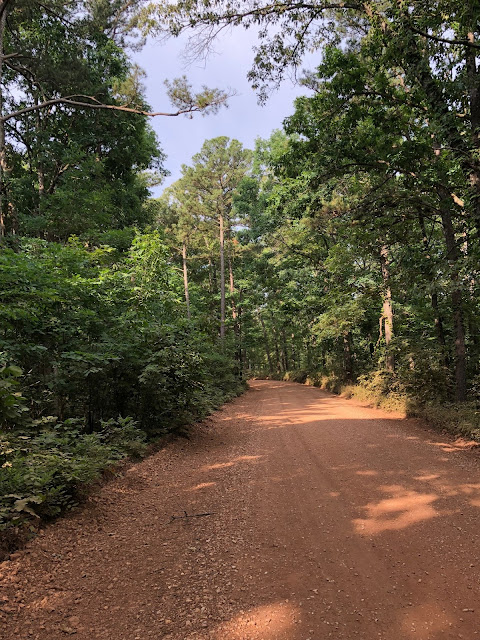 We had a short section of gravel road that seemed a lot like Pumpkin Holler. 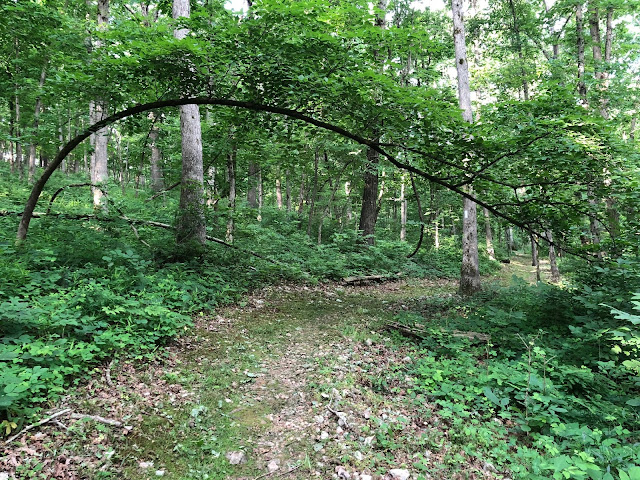 I went through quite a few Salt Sticks (my electrolyte capsule of choice.) I never ran out of water and made myself drink warm water the whole day. I stayed well hydrated and peed 2-3 times. 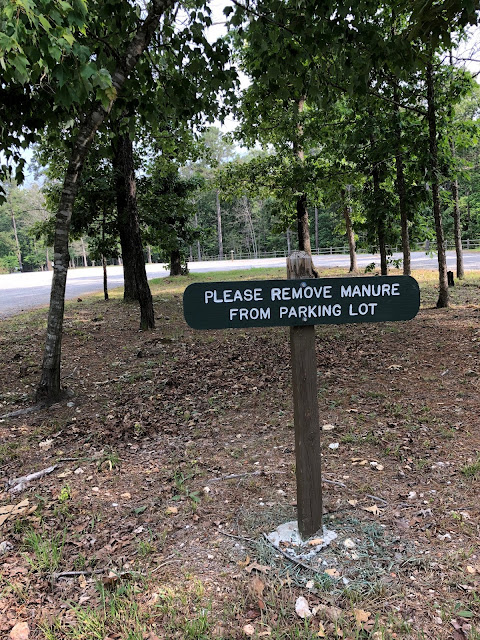 This sign struck me funny. Only now while writing this race report did I realize that this must have been a horse camp.

The best part of the race was seeing Dave Renfro out at one of the aid stations. He just came out to cheer the runners on. I was so glad to chat with him even though it was a quick exchange. Dave has battled cancer for a few years and has such a brave outlook on his situation. The picture below is a screen capture from his Facebook page. 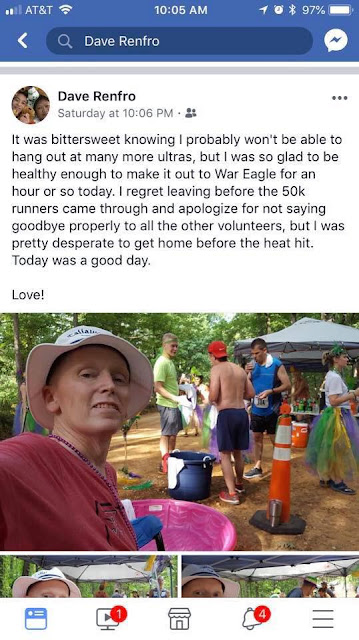 Five days later, cancer took him from us. I was so sad and deeply grieved our loss, and his family's loss.


My friend Kathy Bratton said it better than me:


"Rest In Peace Dave Renfro! I have never seen anyone go through a sickness with such grace and dignity as you did! I will truly miss your macabre sense of humor and your warrior spirit!!!"

So what in this race is an improvement? I had to scrape to find anything. I held up good in the heat, drank and peed, I found a wee bit of speed late in the race--just a smidgen. I'm just gonna call it a decent LSD run. Plus, the shirt was nice.
Posted by ....miles to go before i sleep.... at 8:22 PM