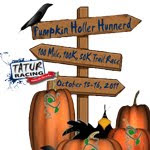 The first running of the Pumpkin Holler Hunnerd is past, although I am still reeling from it. It's 2:30 early Tuesday morning, and I am sleep deprived (still) and worn out from the weekend and yesterdays chores of unpacking and tieing up loose ends, but the point of this post is not to give a rundown of how tired I am but rather to waste 20 minutes of your time whilst reading my race report. Thursday, Brian and I began packing, renting box trucks, motor homes, Dana had bought and packed supplies for seven aid stations, and we finally ended up at Eagle Bluff to camp for the night. Right at sunup, Brian and I (with the help of my nephews Kody and John, and the superlative assistance of Bill Ford) headed out to mark the course. Since it is a huge gravel relatively flat loop, the trail marking was actually pretty easy. It did require miles of driving, but by 4:00 pm, our chore was done. A pasta dinner in Tahlequah, a brief meeting with the runners, and then it was time for some shut-eye. 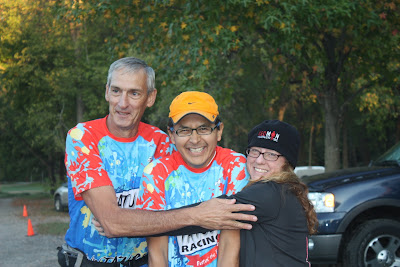 Even before I had some coffee, I was mingling around visiting with friends--some that I see often, and some I seldom see. Here, Randy and Kathy make an Arnold sandwich. There's a LOT of 100 mile finishes between the three of them. 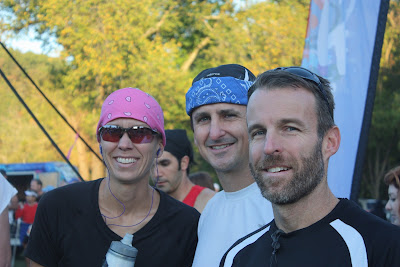 Another trio of friends--Amelia and Jeff, along with Corey, were all tackling their first ultra this day. 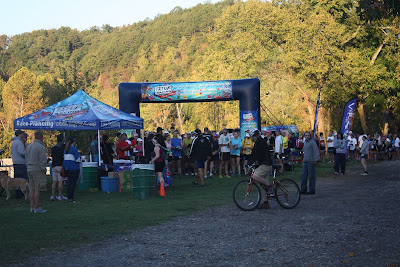 As 8:00 am neared, I mounted my bike and prepared to ride the way to the first intersection, and then on to the first turn that the hunnerd milers had to make. This was great fun!!! 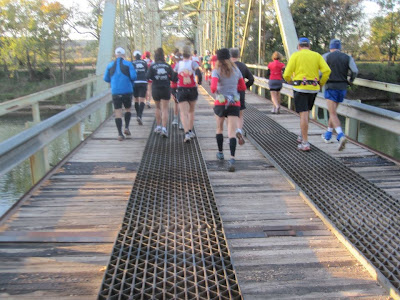 This picture was borrowed from the Facebook page of Deborah Sexton, who ran the 50K with us.

Somewhere on the web page, the course was described as relatively flat--and it is!! (Compared to say--well--Pikes Peak??) While there were no climbs more than 280 feet in the loop, and the 2 mile 500' climb that only the hunnerd milers had to do is over early in the race. 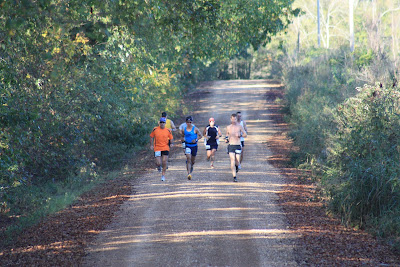 After seeing all the hunnerd milers into their first climb, I pedaled back to the starting area and drove out to the first aid station (Mad Dog) to make sure a certain BAD dog was behaving. Turns out it was being nice this day, but the owners did not pen their dogs up like they were asked to do. The front runners were flying, and the aid stations were scrambling to handle the rush.
I had misplaced my trusty Canon, and took pics with my iPhone. Aaron Ochoa was also taking pics with a big time high dollar camera, and I managed to steal his camera chip, and swiped several pics for this post. 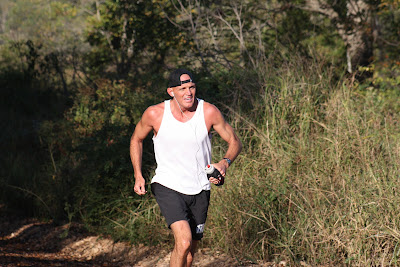 Eric Steele--good friend and RD of FlatRock was seemingly moving along pretty good. I normally have a few cutting remarks to toss his way, but since I have been knighted and he is King, I am working on showing a little bit more respect. It's no fun. 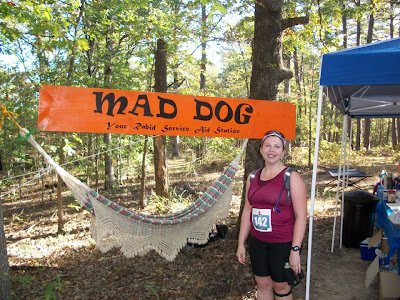 Rachel, doing her first ultra, rests for a short while at Mad Dog. I borrowed this pic from her FB wall as well as the one of me below at the East of Eden aid stop. 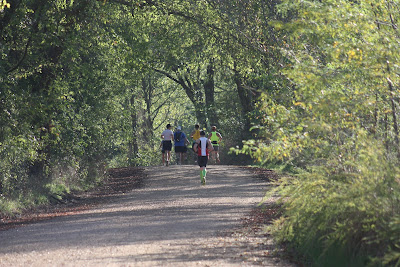 The way my day was from early on--drive the course, check on things, answer missed calls whenever I had a good cell signal, and deliver more supplies, water, food, ice, generators, gas, and sag runners in. 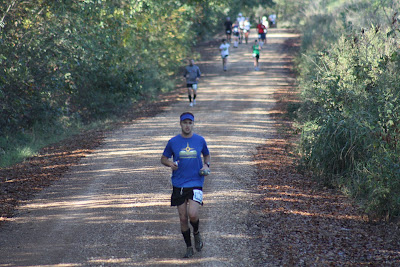 It was an honor to haveDavid Hanenburg, the man behind Endurance Buzz, come up from Texas to run with us. David smoked the 50K, and then hung around well into the next day helping out with the timing, and did live Twitter updates on the race. Thank you, my friend! 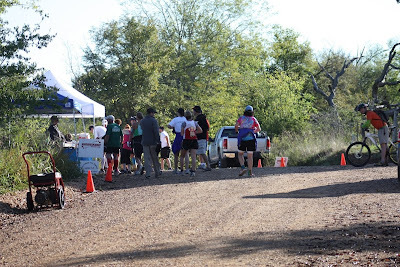 Runners stack up at the Out-N-Back aid station. From there, they ran 1.5 miles out and then back before continuing on the loop. This was necessary so that the course would be an exact 50K. 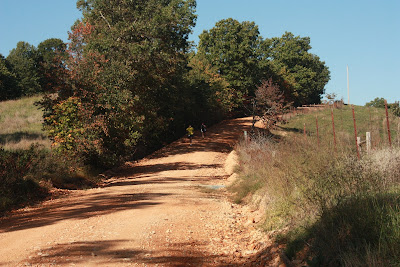 Two more runners drop down to Savannah Corner. There, crew was waiting for a few of them. 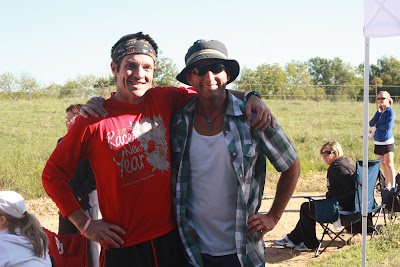 Bill Ford was the aid station captain here. Aaron Ochoa stopped to pose for a pic during his 975 photo-shots. 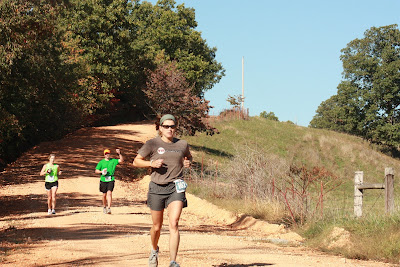 Kristi Perryman screams down the hill into Savannah. 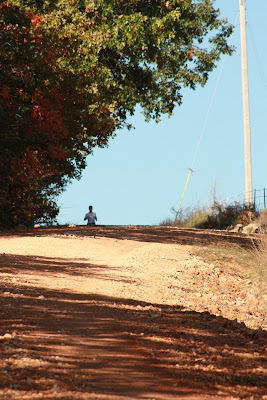 Another runner tops the hill just before Savannah Corner. 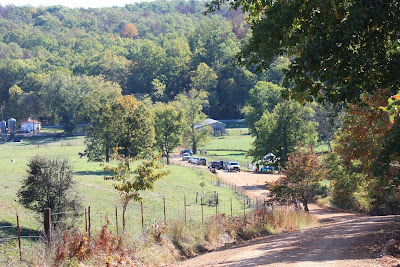 A nice descent making for an electrifying entrance into aid station #3. 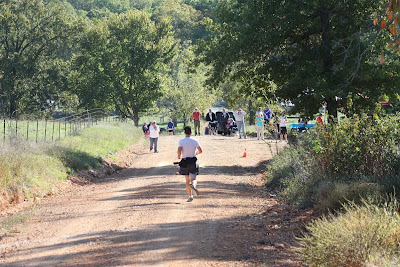 Food, water, and Gatorade just ahead. 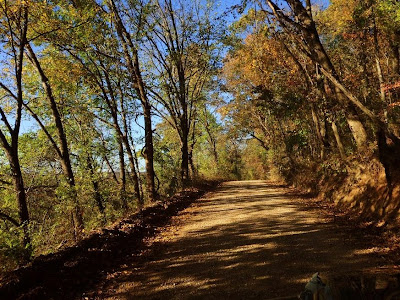 From there, the course turned south. Most of the route was shaded throughout the day. High temps were in the mid 90s, but few people complained. about the heat. They did complain about the hills though. 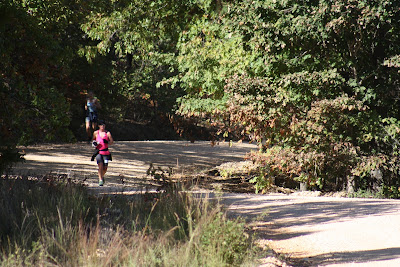 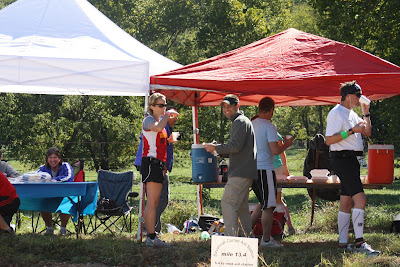 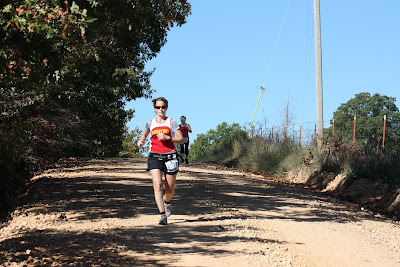 Cassy storms down the hill, running her 2nd time out here. She really made this race look easy. 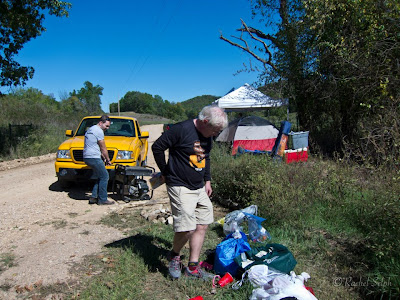 RockStar Ed totes the generator from the truck. He and Kate cooked up beans and cornbread and hot soup all through the night. Yum. 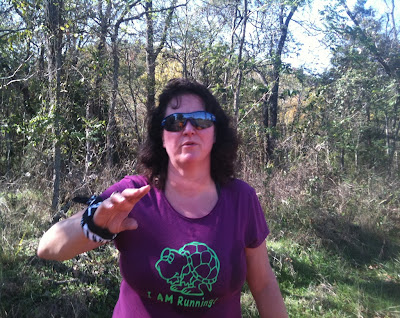 Dana was also having a rough day--with severe back spasms. She toughed it out though, and got her finish but not the PR she had hoped for. 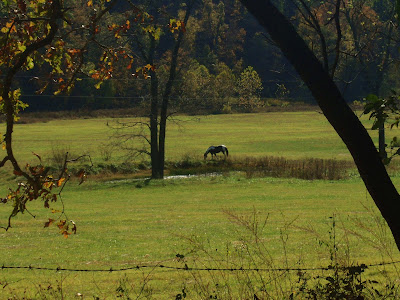 Along Pumpkin Holler road, there are several horses. Some stay as far away as possible, but a few are quite friendly. I motored on along, and all day and all night, I drove--around and around the loop. Burned two tanks of gas, and had 2 flat tires. 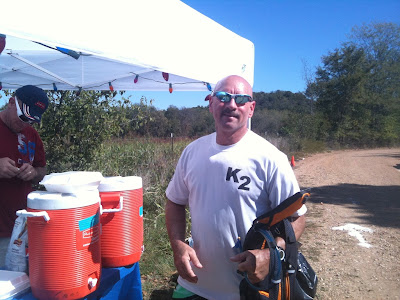 My friend K2 decided that 100 miles was just not in the cards. He stopped at mile 70 and called it a tough day. I finally stopped the continual drive and slept for about 3 hours early Sunday morning before resuming my duties as course marshal/delivery boy,/sag wagon. Upon waking, I again drove the course and took inventory of the runners still on the course. One by one, they made their way in. 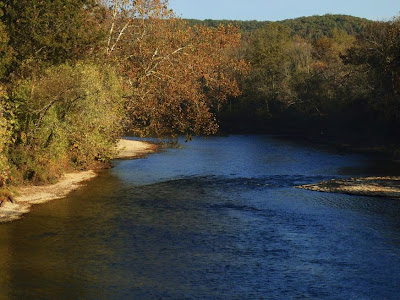 Crossing the big iron bridge for the final time must have been a glorious thing. The view from here is always postcard pretty. 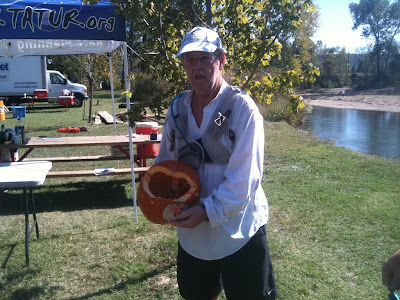 My friend Dennis Crosby was the final finisher, finishing with 20 minutes to spare before the final cutoff. Dennis took the liberty of SMASHING the Pumpkin.

189 folks signed up for our inaugural event. 166 toed the line. I was elated to have such a good turnout for the first year! 57 started the hunnerd mile--31 finished. I guess I have to admit that it's sort of a tough course. I thought it was cool that a woman won the 50K--and even more amazed that she ran it in 3:57!! See, it must be a relatively flat and fast course! course results can be found here.

I had the awesome help of over 60 volunteers. Aid station captains Kevin Lemaster, Joel Everett, Bill Ford, RockStar Ed, Chuck Streit, Terrie Broomhall, and Stormy Phillipd stayed all day and all night and all day manning their posts.Others who put in close to 30 hours were Janine Robertson, Derek England, Brynna Schelbar, Kody Wilder, John Childress, Kate Ellisor, and Laurie Whitesel. That's not to slight the several others who worked 4-12 hours helping out, or spent hours beforehand buying supplies and doing preliminary work--like my sweetie Dana, and Brian and Kathy Hoover. You all are so valuable to me. More about Brian. Besides building a great looking website, he is a slave-bot setting up all of the start/finish area, receiving all the race entries, doing all the timing, a lot of the loud-mouth work, emceeing the pre-race dinner (one out-of-towner said he was FUNNY??) hauling stuff down and back, loading and unloading truckfulls of race stuff, writing checks--you name it, he probably did it. 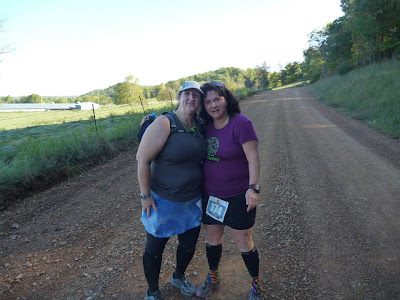 Dana finished her 50K despite having severe back spasms. I was quite proud of her for toughing it out. Susan Westmoreland was a great help as well. She made the signs with arrows on the course, which was a great help especially for the crew cars. She ran her pace and her race, TZ style--enjoying the scenery along the way and taking LOTS of very good pix. If you are her Facebook friend, check them out.

All in all, it was a super race. No one got lost but there were a couple of 100K runners who went out the wrong direction on their second loop. Most folks who complained that it wasn't flat also said they'd be back to run it again.