The third running of the Pumpkin Holler Hunnerd has came and gone, and this year was amazing. We had a few less entrants in all four distances which was a little disappointing, but the enthusiasm was over the top. 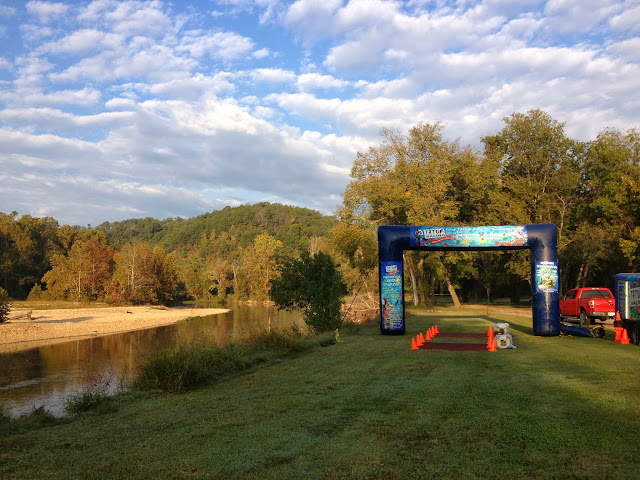 Eagle Bluff hosted us again, and as long as Comb's Bridge is still in service, we'll have it here. This is possibly the most scenic stretch of the Illinois River. Brian and I camped Thursday night, and were up at the crack of dawn to get things ready. The porta-potty dude came at 9:30 instead or 8:ish, so we started work on the loop with a big time deficit. 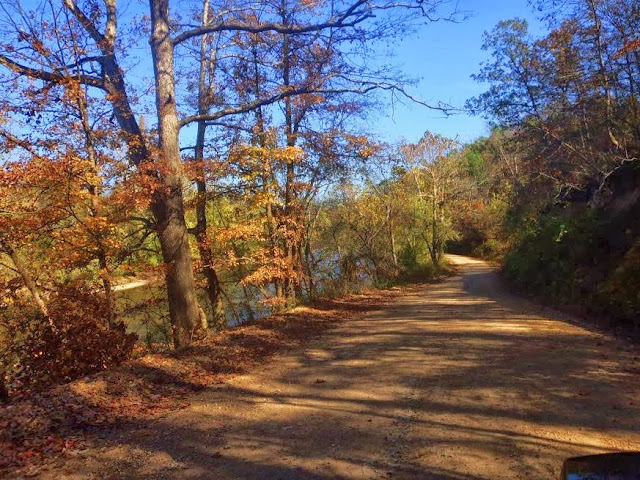 Driving the loop, and waiting for the outhouses to be prepped gave me time to snap a few pics. This is at mile 4 just past the huge bluffs. 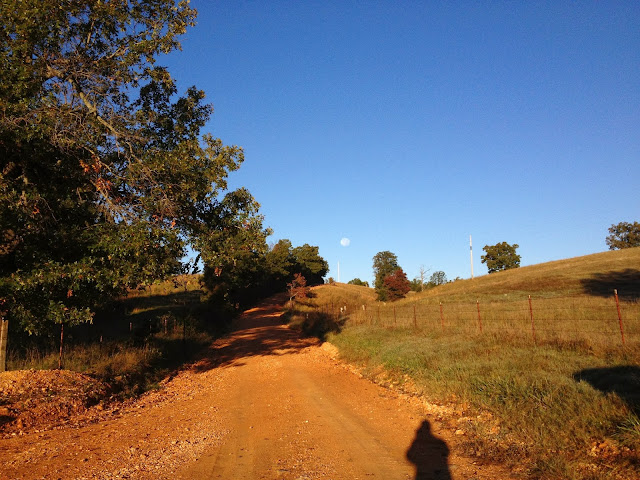 Standing at Savannah Corner, the full moon is retreating over the horizon, prepping for full illumination the next night. Runners could easily get by without a headlamp, it was so bright. 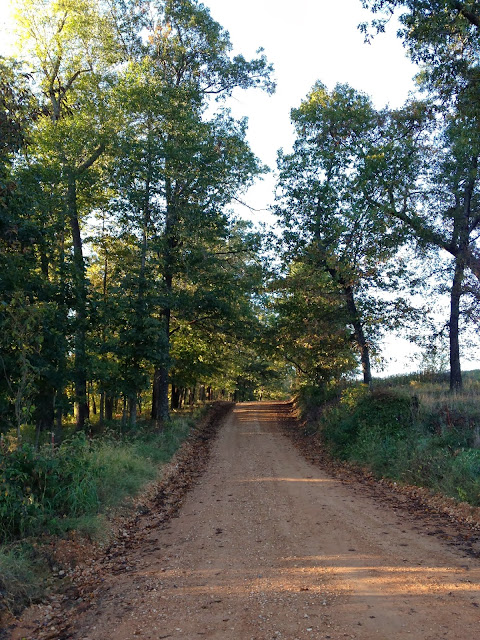 Mile 14ish, between Savannah and the Nature Center. The roads were in the best condition they have been in for the three years we have been here. Still, a steady diet of gravel to the feet made for some good hot spots and blisters for a few runners. 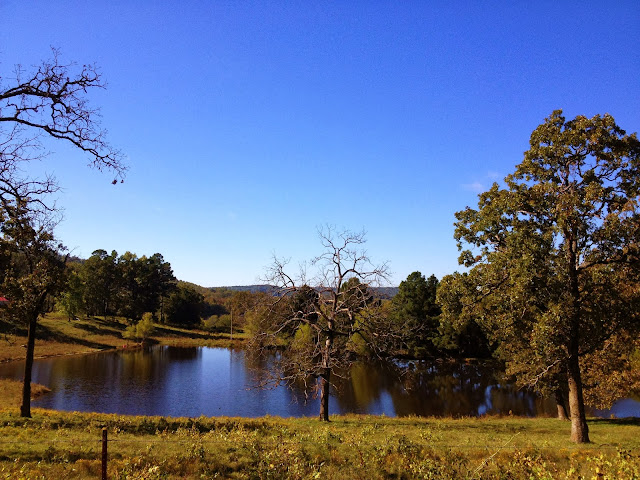 This is taken from the 3 miles of paved road between Hard Up Ahead and Bathtub Rocks. Hold up camera/iPhone, push button, take awesome picture. It's just that easy at Pumpkin Holler.

As usual, the 50K, 100K, and 100 Milers all started together at 8:00 am sharp.
The countdown started from 10 seconds, and I heaved the pumpkin skyward at the count of two seconds.

The great orange vegetable split into two pieces, and was promptly trampled. The two boys in front are none other than ultra-stars Brandon and Cameron Plate, doing their first 100K. They have several 50Ks to their credit, a 50 miler, and 100 miles over three days at the Silverton 1000. Their plan was to run the first 50K conservatively, and then their dad Mark would run the 2nd 50K with them. It was his 1st 50K, and their plan worked well. They all finished middle-of-the-pack. I am not sure I could have ran the pace they did, even doing a 50K.


In the blue to the right--Kathy Hoover. This was her 3rd Pumpkin Holler Hunnerd, and also her 3rd 100 miler in as many weeks. Yes, you read right--THREE! She ran the Arkansas Traveller on October 5th, Heartland 100 on October 12, and then was trying for 100 miles here. Would she make it???

Two hours later, the 25K was sent off.

Both the 100 mile and 25K took off to the road that bisects the Nichol Nature Preserve. It is possible to see a lot of wildlife such as raccoon, squirrel, skunks, deer, elk, and even bobcats. Deer were plenty, and almost friendly. But the big treat was at the aid station at mile 4. 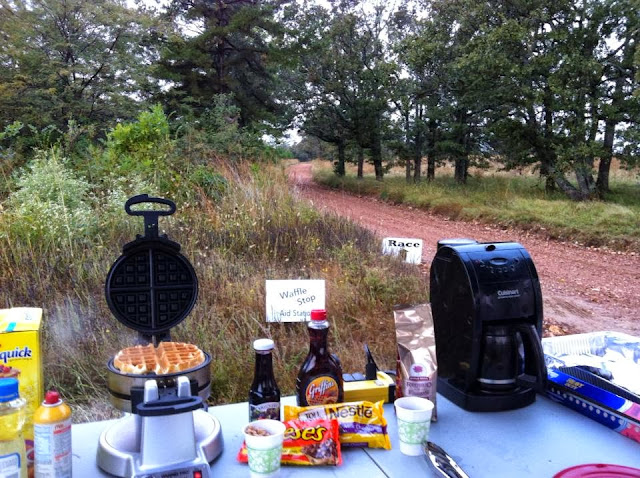 Mitch ran the Waffle Stop, where the 100 milers turned around. The 25K got waffles here, and on the way back.

Meanwhile, on the big loop where the 50K and 100Kers went, and the 100 Milers came later--the Mad Dog station had a lot of pet tricks waiting. 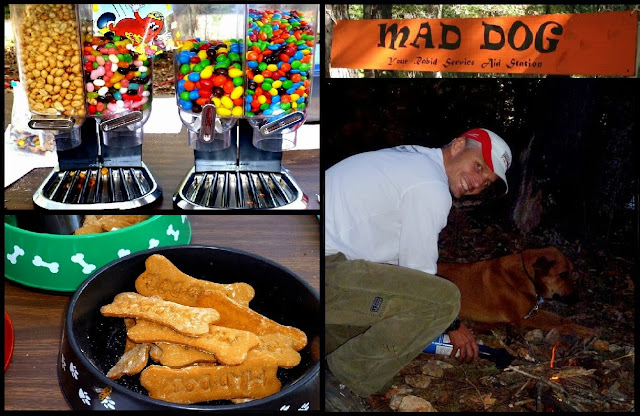 Joel Everett and the Muskogee Running Club manned the Out-N-Back station, where runners fed their faces at mile 7 and mile 10.

Tony Clark, along with Steve and Dennis from Kansas ran Savannah Corner--possibly the most scenic aid station on the course.
This was a crew station, so fan support was thick especially in the first loop. The early stations had a little down time between the first and second loops, and Savannah was geared up and ready come nightfall. (This video was posted on Facebook, and I could not get the embed code, so you have to click to get to Tony's Facebook wall, and then click on the video. It's worth the extra clicks to see it.) 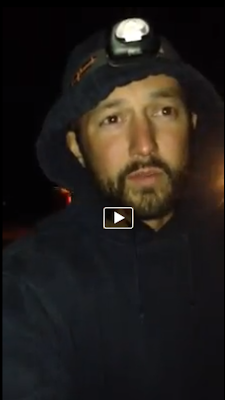 Next was the East of Eden station, manned by Randy Ellis and Susan Westmoreland, and joined later by Lynna Gilstrap and Laurie Biby.
I ran into a herd of GOATz here. From left to right--Bill, Ron, Bobbie, Kristina, and Josh. This is the location of the Great Gourd Challenge, a short out and back where you could choose to run an extra mile(ish) and climb over 300 feet in the process. Doing so earned you a nice pin to wear on your shirt for the rest of the race.
I was pleased that so many brave peeps took on the challenge. It's funny that people will moan and groan about hills, but dangle another hill in front of them, and they will run it. Trail runners are like that.

Earl Blewett and Chuck Streit worked the Hard Up Ahead station, which was a crew stop as well. I did not get pictures from here. :-(

Next was BathTub Rocks. 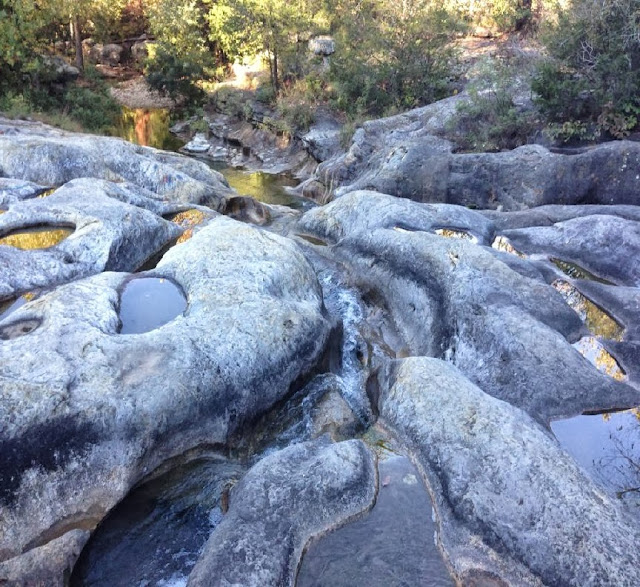 This is the 18th wonder of the world. It's a great place to soak your tired feet. The magical waters will take away all the aches and pains, and have actually healed blisters and black toenails. Russell manned this stop with help from David Newman.

Last Gasp was managed by Mishelle Hancock with help from Susan Howell, who was signed up to run but had to withdraw due to an injury. But, she drove from Kentucky just to help!! Awesome! They were relieved by Travis and Shorty Jennings. Travis ran the 25K, and Shorty did her 1st 50K. I'm not sure, but Shorty probably snuck in a well deserved nap.

A big shout out to Zach Adams, who DNF'd here last year but came back this year skinnier and meaner. Zach ran smart and steady, and kept picking off runners to finish 2nd overall. 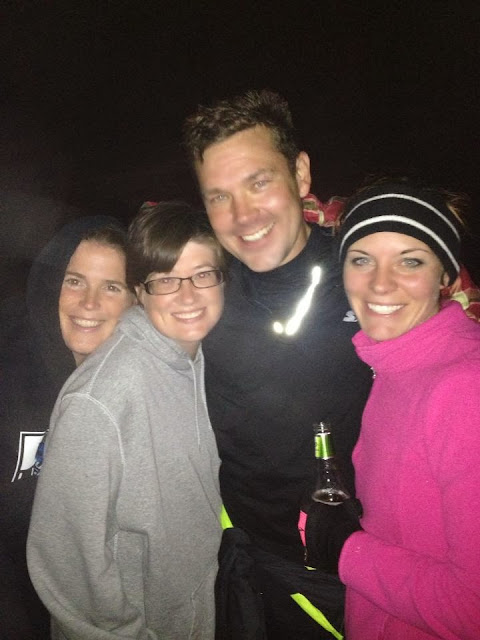 He had a crew of babes--imported from Kansas who fed him, massaged his feet, lied to him about how good he looked, and took turns pacing him in for his fantastic finish. Joell, Melissa, and Candi are all experienced ultrarunners, and I hope they come back to run with us next year.

Stormy ran the show back at the finish line. He was on the loud speaker all day and all night announcing runners names as they came through and finished, including runner trivia, lies, jokes, and encouragement. Maybe I was just tired and delirious, but I thought he was funny.
This is another where you need to click, then click again. It seems I cannot embed Facebook videos. 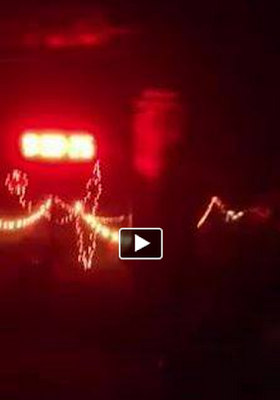 I spent most of the day and most of the night driving the course checking on aid stations and runners. I did manage to get a 64 minute nap, and it added no life to me, but the coffee helped. Come daybreak, I drove the course taking inventory as to where the runners were, closing down aid stations that were through, and picking up drop bags. I finally got back to see the final 6-8 100 milers come on though. 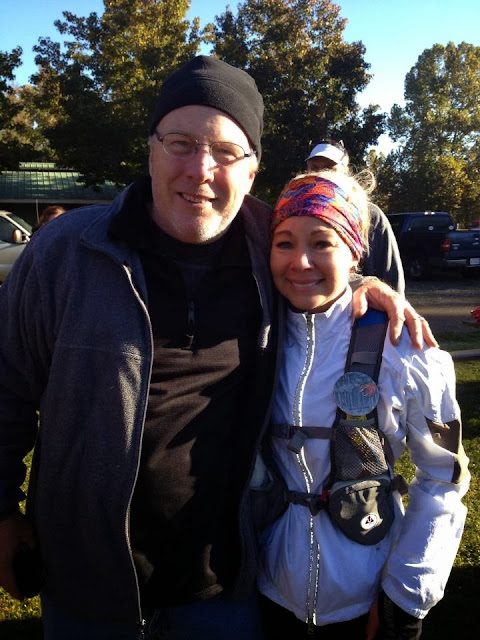 Michelle McGrew got her buckle, after coming up short at the Prairie Spirit blizzard last year. She was 3rd female too. I was so proud, as we have ran together some, and she picks my brain for ultra advice from time to time.
Kathy came in 57 seconds under 27 hours, good enough for 4th place female. But this was also her 3rd 100 mile finish in the past 3 weeks. Since October 5 through October 20--a mere 16 days--she has raced over 300 miles. 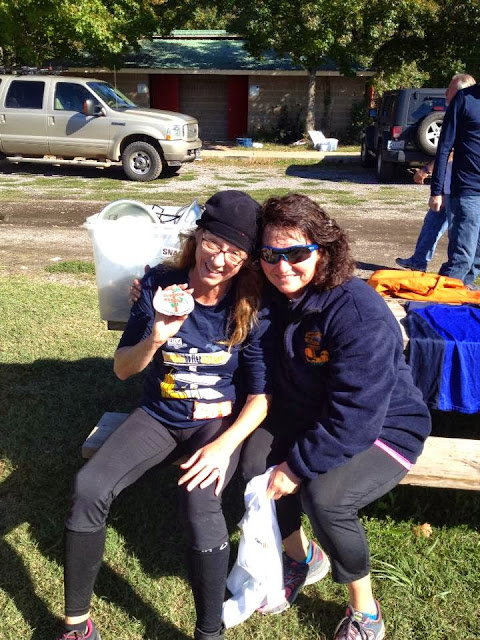 Tired yes--but she looked like she was out for an easy little 10 miler every time I saw her. Racing the past three weeks, she got stronger each time out. 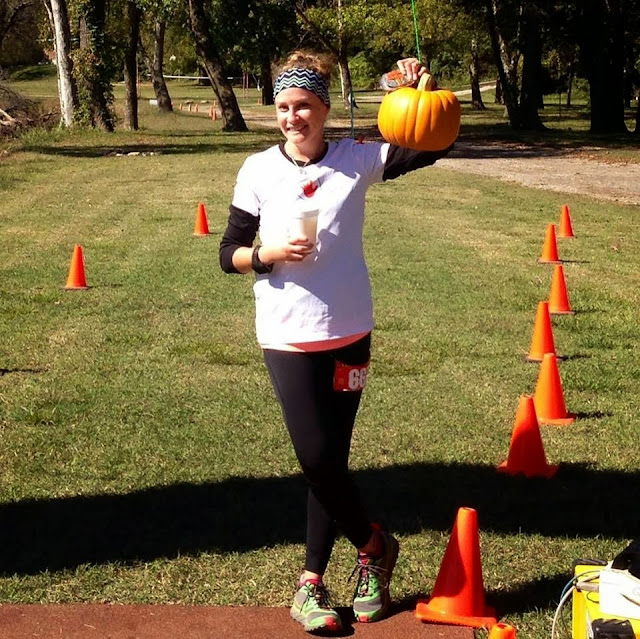 Another runner who came up short last year here,  DNF'd at Mark Twain last year, and was pulled from the blizzard at Prairie Spirit got the monkey off her back by acing this race. Danielle had her whole race dialed in-- never going too fast but never to slow, eating and drinking, and dancing all the way around the course. There was never a doubt she'd finish. I was so thrilled to see her get her buckle. 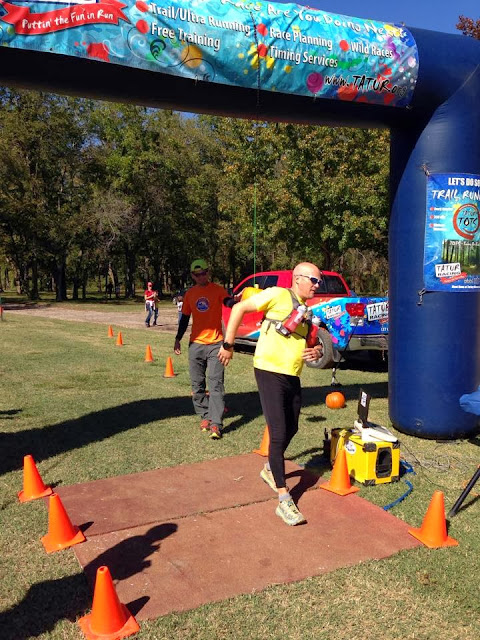 Mr Kurt Egli, after coming up short at Arkansas Traveller a couple of times, battled HARD to cross the finish line. Kurt's back started wigging out after about 50 miles, but he would not stop. Under quite a bit of discomfort and with the help of some great pacers, he made it though. It was inspirational to see him work so hard.

Finally, my friend Ken Saveth turned it up a notch in the last half of his last loop to finish 18 minutes under the cutoff. Ken was in the hole with 17 miles to go, but the sun came up and he dug deep and pushed through to get his second 100 mile finish. 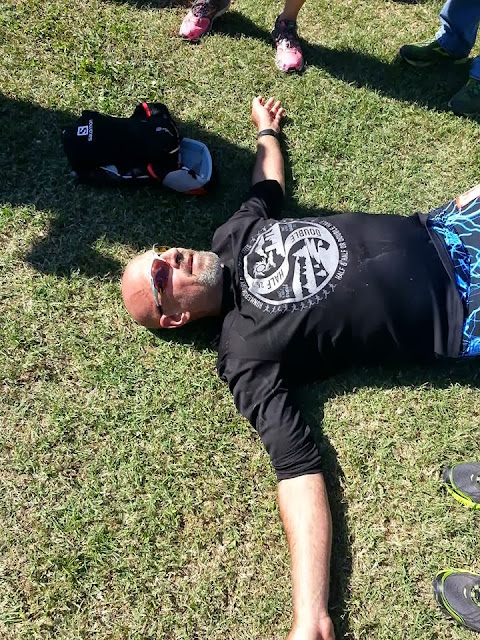 He is collapsed here, but not before SMASHING the PUMPKIN, an honor bestowed upon the last finisher.

Click on the picture below for many more pictures from the race, taken by Danielle Huddleston. 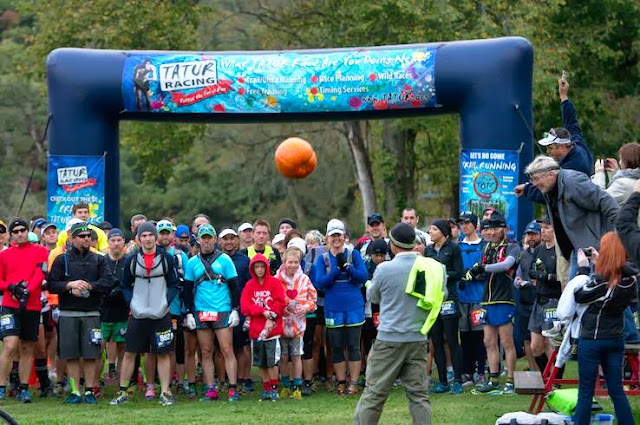 Many many thanks to all the volunteers who spent hours and hours serving our running friends. Susan Westmoreland did so much behind the scenes work. Dana slaved for days buying and assembling the aid station kits. Lori Enlow did quite a bit of leg work for us, and then loaned us three generators and helped out all night long along with her family--and all that after winning the 25K. Brian, Stormy, and Shannon McFarland held down the fort at the start/finish. I was almost never there, yet the whole thing went off like clockwork--even when the clock ran out of juice. Brynna made gourmet breakfasts for the late finishers, and Mitch whipped up some biscuits and gravy. There were a lot of other helpers--I am sure I've missed a lot of them. Jody McFarland, John Nobles, Rhonda Presley, Trish Carpenter--thank you all.

And finally, a very popular comic strip from a state to the north has adopted our race as the butt of their humor. But as portrayed above, the pumpkin has earned the respect of the GOATz. I expect an invasion from Nebraska next year though. The sound of thundering hooves will be heard throughout the hills of Pumpkin Holler. 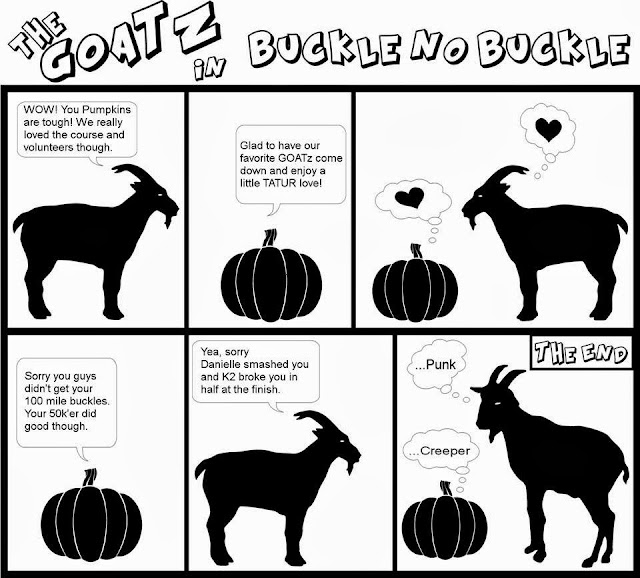