Race report from a great ultrarunner and friend

I set up my tent at Eagle Bluff resort, already starting to feel the nip of what would be a chilly night. This years event was booked as a family event and the tent next to mine fit that category. Kids were running and playing and I soon learned the adults both planned to run, although they would have to take turns. I was trying hard to concentrate on what I was doing, but kept getting distracted by the family tent group. Lucky for me this race takes little or no planning. Drop bags are very optional, since you seem to hit the start finish at all the right times. I put out 2 drop bags but used them mostly to drop stuff off. 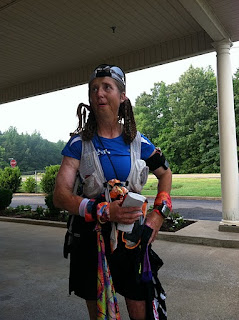 I signed up for the race at packet pick up. I was at Heartland the week before assisting another runner in her push for a finish, the race felt awful to me and near mile 70 when we timed out I could have cheered. The blisters were healing and my stomach had settled so, last minute sign up. I knew I would probably never see the finish, but I was going for it. The pizza at packet pickup was probably good, but I never managed to eat my piece. I did not stay for the race briefing, because it was going to put the trip up the mountain well past dark and cold.

At the tent I did my last minute hair braiding. It takes awhile and several braids to get my hair up and ready for the race. I also went ahead and put on my morning running clothes. I set my alarm and crawled into my sleeping bag. I texted my daughter Elizabeth how cold it was and tried to go to sleep. I kept waking up, but it was not the family tent that was so noisy. Late arrivals, excited and most doing one of the shorter races seemed to come in at all hours. It is the one main bad thing to me when camping out or motel rooms, if there are shorter races those guys seems to be more noisy and up much longer. They also wake up wired and howling, while us hundred guys are trying to remember which drop bag has our extra socks, after all we may need them for gloves later! Twice I woke up thinking I had overslept only to realize it was still dark outside.

The weather for the start was perfect, nippy, but we were just perfect when moving. There was three miles of pavement every loop, but the rest was gravel, a little rough in spots. The rocks seemed to get sharper and harder as the laps progressed, but my feet were tender to start with. The scenery of rolling roads and fall leaves was amazing. I love this course it is not technical, but you never get bored. There were no cheering crowds on the course, but the horses and cows seemed to be urging us on.
Taturs know how to do aid stations. They had hot food. They were friendly. The one time I sat down to get a rock out of my shoe, I had help from one guy and one guy trying to push me out. Just what I needed. The Mad Dog aid station had the best doggie treats for us. Mad Dog also had finger toothbrushes , paste and water. Yep, A for the aid stations.
I threw up very little and none of the gut wrenching heaving up a rib type. Heartland the week before had been a puke till dead and “just let me die”, race. I managed to stay hydrated even though the water sucked. I had sweet tea with lemon at camp and filled up my 50oz bladder with tea and ice twice at camp. Got ice at several aid stations too and just waited for it to melt. With a 50k to go I dropped the pack at camp and drank almost nothing from then till finish, but I ate several times which is odd for me, but food was staying down, so why not!

Clouds where there when the sun came up and besides humidity, the last 50k for me was done in darkness and then nice clouded shade. Ensup ran by and I took off with him with only 10 miles to go. I had plans of trying to hold on to him till finish, but rocks invaded my shoe. The gator was doing its job, but the laces where somehow gapping a spot in front of the gator. I had to keep stopping the little stuff was just jumping in and right into the blister area at my metatarsals. I gave up and slowed down, I am competitive, but knew of not one soul, that should be within thirty minutes of me except the girl behind me. People kept talking about others behind us, but I had been off pace earlier and knew there could be no one else. My feet hurt, but the weather was so perfect for a finish, I jogged in the last few miles and picked up my new Pumpkin Holler Hunnerd buckle to go with the 1 extra mile up the mountain pin, that I am also proud of.

I sat with Kathy who had finished about thirty minutes earlier and Roman who had had to call it a day short of the finish and we watched the last runner come through and smash the race ending Pumpkin. I told them of the almost gunshot hit on me, too close. I had let two aid stations know, but now was finding out several other runners seem to have also had near misses. Hunters and runners are never a good mix, but where I almost got hit I could see no hunting / No trespassing signs on both sides of road. Since last week at Heartland we had lightening strikes from the heavens nearly missing us, the shots were short adrenalin rushes, quickly forgotten. The race did take the shots seriously and inform police, once again TATUR’s are awesome. I had fun, not an easy 100, but very do able. This is a good first hundred, well marked, good aid and back at your car or campsite 3 times once at like 7 miles, then 3 50ks, although the last is the finish!!! Well since Kathy asked I looked it up and tried to remember and I officially count 12 100 mile finishes now, my first being OLD DOMINION MEMORIAL in 2005. I know the number of DNF’s is at least double that number. It was my second try at Pumpkin Holler, nailed it this time.

I should be more discouraged by my DNF,s , but I am just not. I cant even understand the people who get so upset over not finishing. When you look at the fact that you are toeing that line for a 100 mile race, you know it is a long ways. I think just standing on that line is something, and a chance at a real experience. The people you run with and the aid station workers are so special. No matter what goes wrong, I tried and I got to be with some of the greatest people on the planet. The race director, the aid stations and the other runners all helped me to my Pumpkin Buckle and I wish to thank them all!